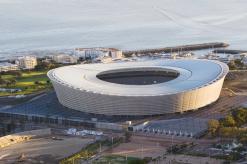 The Cape Town Stadium will host some
of the matches of the tournament.
(Image: MediaClubSouthAfrica.com) 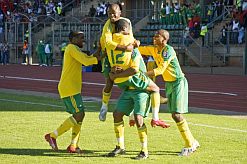 Midfielder Jabulani Ncubeni is expected to
feature in the Amajita side.
(Image: Mtnfootball.com)

Some of football’s future stars are making their way to the Mother City for the prestigious Cape Town International Soccer Challenge, a tournament featuring the under-20 squads from eight African and South American teams.

Amajita, as the South African under-20 is known, will host Brazil, Argentina, Nigeria, Ghana, Cameroon, Kenya and Japan. Brazil is the current Fifa U20 World Cup champion, while Nigeria lifted the 2011 African Youth Championship trophy in South Africa.

Egypt was initially selected to compete, but after the Port Said Massacre, withdrew from the competition and was replaced by Kenya.

The tournament will be held between 24 May and 3 June at the Athlone and Cape Town stadiums.

According to South African Football Association (Safa) Cape Town chairman Norman Arendse, the tournament will focus on cementing the legacy from the 2010 World Cup and to contribute to the development of the game in the country.

Asked if Brazilian prodigy Neymar will be playing in the tournament, Arendse said he was unsure.

“Even if Neymar does not come, there will still be good players on display. We will see the names in this tournament cropping up in the Brazil 2014 World Cup,” he said.

Former South African U20 international and Moroka Swallows striker Shaun Haschick is optimistic about Amajita’s chances of progressing in the challenge, as most of its players have professional experience.

They are contracted full-time at various professional clubs in the country’s top tier – the Premier Soccer League (PSL). This, said Haschick, is a sure sign that national teams have improved over the years.

He added that the 2010 Fifa World Cup gave the local game a major boost and it is evident in the amount of young players in the PSL.

The tournament, he said, can help identify quality players as there seems to be a lack of them at the moment.

Though development is a major focus for the tournament, Arendse acknowledged that very little is being done in South Africa to grow football at grassroots level.

“Development is largely neglected. Only elite youngsters are being chosen,” he said.

Haschick supported Arendse’s view, saying that youngsters coming through the ranks are not equipped to play at the highest level.

He said almost none of the junior national players graduate to the senior side. This is because there is a lack of development structures.

“The junior teams are supposed to act as a feeder system so that by the time the youngsters reach the senior team, they have the skills to compete at that level.”

Haschick added that other developments such as a reserve league within the PSL will help in nurturing talent.

“One reserve league was implemented but fell away. This season they restarted it but it is only in Gauteng,” he said.

Learning from other countries’ development strategy

Haschick listed a number of issues that he feels impede the growth of the sport. He claimed there are inconsistencies amongst the provinces, too few academies, no access to quality coaching and not enough football in schools.

Haschick said players are recruited at least six years later than their European counterparts, who start their footballing education as early as six years of age.

“That is why our youngsters are not good at crossing and shooting, because they lack those skills that should be taught at an earlier age.”

He believes that South Africa can learn from Brazil, which produces quality players regularly but is similarly developed both economically and socially.

Young Brazilians begin their footballing education on the futsal court and only after 12 years of age do they play on the field.

“In futsal you learn to play with limited space, with quicker feet and quicker passing. A player develops a unique vision on the court,” said Haschick.

About the Cape Town Challenge

The tournament originally began with four teams in 2010 as a test for the World Cup staged in South Africa in the same year. Its first participants were South Africa – the then African Youth and Fifa U20 World Cup champions – Ghana, Brazil and Nigeria.

Arendse said the organisers are looking to structure future tournaments according to the eight-team Fifa Confederations Cup format. This means winners from the six confederations will be invited as well as a World Cup winner and the host nation.

The tournament will be broadcast on the SuperSport channel on DSTV.