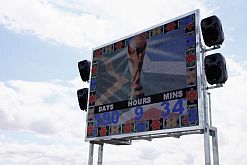 A mobile cinema will be visiting small
towns around South Africa and screening
the best football documentaries based
on the beautiful game.
(Image: www.nelsonmandelabay.gov.za)

A mobile cinema has set off on a tour of 50 small towns around South Africa to bring the best football documentaries to those who won’t be able to afford to see any 2010 Fifa World Cup games live at the stadiums.

The aim of the project is to stir up excitement in the build-up to the tournament and give audiences an opportunity to learn more about history’s greatest teams and football stars.

Sponsored by the National Lottery Fund, Soccer Cinema began its cross-country journey in Cape Town on 6 April, and is due to end on 2 June. “In the months before the championship it is vital that everyone feels part of this event,” said project manager Nathalie Rosa Bucher.

“Unity can be built by inspiring South Africans through documentary cinema with insight into famous players, teams as well as incredible highlights and events from the beautiful game’s colourful past.

“These films are new to South African audiences, and comprise a history and world-view of football that will be available to the public across the whole country,” she said.

Documentary filmmaker and producer Don Edkins, together with a small group of Dutch, Danish, and Finnish film professionals, initiated the project.

The 10 films to be screened include More than just a game by South African director Junaid Ahmed. It’s set on Robben Island in the 1960s and tells the story of political prisoners there who set up a football league as a way of coping with their incarceration.

UK director Daniel Gordon’s The game of their lives will also be shown. The film is about the seven surviving members of North Korean national football team who participated in the World Cup in 1966. Their victory over Italy and place in the quarter-finals made them the first Asian side to advance so far in the tournament.

Johan Kramer’s The Other Final tells the story of a football match between Bhutan and Montserrat, the lowest seeded teams in the 2003 Fifa world rankings. The game was played in Bhutan, with the host team defeating their opponents 4-0.

Films about African stars such as Didier Drogba, Michael Essien and Sibusiso Zuma will also make it to the mobile cinema, alongside footage of former Argentinian football great, and current coach for that country, Diego Maradona. Brazil legends Manuel dos Santos Francisco, nicknamed Garrincha, and Edison Arantes do Nascimento – best known as Pelé – will also feature in the films.

Communities which Soccer Cinema will visit are excited about the tour. “I think at times we felt forgotten and left out of all the Fifa events, but this project has brought back our excitement,” said John Grootboom from Worcester in the Western Cape.

“We are really looking forward to these films – especially stories about the African players. They will be good inspiration for the youth here,” he said.

Thato Maseko, from Humansdorp in the Eastern Cape, agrees: “Many of the youth here love football, but they don’t know much about the history of this country and the history of their favourite game. These films will give them the chance to learn about both. It will be a great treat for the people of this community – young and old. It will bring the World Cup closer to life for all of us.”