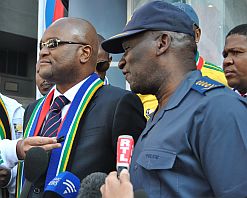 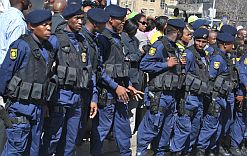 Police have been applauded for the work
they did during the World Cup. 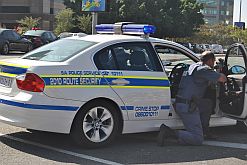 A new fleet of BMWs is part of the World
Cup legacy. (Images: Bongani Nkosi)

Although the 2010 Fifa World Cup came to an end almost a month ago, the crime-prevention strategy used during its month-long run will continue, helping create a safer, more secure South Africa.

Police Minister Nathi Mthethwa told Parliament on 3 August that the tournament “might have come and gone, but the security legacy in the fight against crime is still benefiting the country”.

The heavy investment in police resources and skills, which undoubtedly contributed to the success of the Cup, forms a major part of this legacy, according to Mthethwa.

Some 44 000 officers, 3 000 more than initially planned, were deployed during the spectacle.

“All these resources are still with police … and are serving as an enormous arsenal in our fight against crime.”

In total, Mthethwa’s department was allocated R1,3-billion ($18-million) for its World Cup security strategy, which was well executed and led to very few criminal cases being reported. This even impressed Fifa, which applauded the South African Police Service in a post-tournament media briefing.

“We spent our budget accountably and sensibly in accordance with the crime-prevention and combating approach of this security plan, which resulted in the safety of our citizens and visitors from around the world,” he said.

Part of this budget remains and is being used to further improve the country’s police services.

The men and women in blue kept security tight at stadiums, hotels and other public viewing areas during the Cup, and also maintained a high visibility on the streets doing spot searches.

Collaboration with international agencies such as Interpol was also instrumental in ensuring a safe World Cup.

The police’s fleet of armoured vehicles and forensic science laboratory were refurbished ahead of the tournament, and 40 helicopters were made available to help in overhead surveillance operations.

“The number of police personnel added to the force, as well as the equipment acquired for their use, is one of the important legacies of the 2010 Fifa World Cup,” said Mthethwa.

“The emphasis is now on sustaining these best practices and continuing to deal a devastating blow to crime.”

This was reinforced at a meeting of top police management in Mpumalanga province at the end of July, according to department spokesperson Zweli Mnisi.