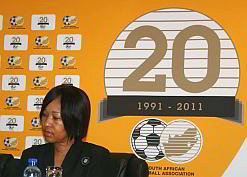 Danny Jordaan has been an instrumental
executive in Safa for many years. 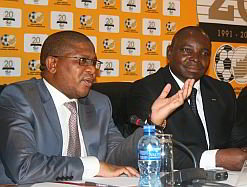 The South African Football Association (Safa) is happy with its achievements over the last 20 years since its founding, its executives have said.

Safa marks its 20th anniversary in 2011 and it will celebrate the milestone throughout the year. Festivities were launched at its premises in Nasrec, Johannesburg, on 23 March.

The association’s executives, most of whom have been with the organisation for many years, reflected on their achievements with pride. “Indeed, we have done well over these 20 years,” Safa president Kirsten Nematandani said at the press briefing.

Their highly acclaimed achievements include winning a bid for the Fifa World Cup and two bids for the Africa Cup of Nations (Afcon). National senior team Bafana Bafana’s double qualifications into the World Cup and an Afcon championship are also part of Safa’s success.

Bafana won the 1996 Afcon, which was staged in South Africa. At the start of 2011, the Confederation of African Football (CAF) awarded South Africa the rights to host the tournament in 2017.

Bafana made it to the 1998 and 2002 Fifa World Cups. The team qualified automatically for the 2010 Fifa World Cup due to Safa winning the rights to have it staged in South Africa.

The under-20 national team’s qualification and participation in the 2009 U/20 Fifa World Cup in Egypt is also achievement that Safa is celebrating. The team has also played in various Cosafa competitions and became champions three times between 1999 and 2004.

Bantwana, as the under 17-women’s squad is known, became the first female national team to qualify for the Fifa Women’s World Cup and participated in the tournament in September 2010.

The finest result of the under-23 men’s team was qualifying for the Olympics in 2000, where it performed theatrics to beat Brazil in a thrilling match.

“The progress of South African football has been remarkable,” said Danny Jordaan, one of four incumbent Safa vice-presidents. “Sometimes we forget that South Africa, in a short space of time, has had such remarkable success.”

Nematandani added: “We’ve hosted one the world’s most sought-after events, the World Cup.”

But it has not always been rosy for the national football teams. “Being number one in Africa [in 1996], that was maturity. As time went, we lost focus,” Nematandani admitted.

Bafana has failed to qualify for Afcon a couple of times. It was also responsible for some of the worst performances in others.

It dropped significantly in the Fifa rankings over the years. Its highest ranking was 16th position in 1998, but it sank as low as 68th in 2008.

It’s been climbing again since 2010 and now ranks 46th. “Our national team is going up in terms of rankings. We’re on an upward trend,” said Nematandani.

The under-23 national squad has also slumped over the years and has often failed to qualify for important competitions.

But the team’s campaign to qualify for the next Olympic Games is gaining momentum and Bafana’s sharpening its act in the battle to qualify for upcoming Afcon.

Safa’s major objective when it came to being in 1991 was to achieve unity among football associations in the country. South Africa needed a single association to be re-accepted into all-powerful international football forums like Fifa.

It had previously been expelled due to the former government’s discriminatory apartheid policy.

Jordaan has been with the association since its inception. He remembers that there were at least five national associations before Safa came to being. They were incorporated to a single association, and Safa was born.

Safa became a member of CAF in 1991 and Fifa accepted it in 1992. During that period South Africa made a return to international football and was allowed to play other countries.

Bafana was the first national football team to be assembled and participate in international matches.

Roar of a lion … agility of a cat

The sobriquet Bafana Bafana has become a major driver of public debate over the years. The name simply means “the boys the boys” and personalities such as former president Thabo Mbeki have taken a swipe at it.

Opponents of the nickname argue that it’s not appropriate for a national team.

It looks highly unlikely that the name will stay in place when a three-person Safa committee reveals the results of an investigation currently under way. Indications are that political forces want the name changed.

Mbalula did not mince his words in opposing the name at the press briefing.

“We need lions that roar … and that demonstrates the agility of a cat,” said Mbalula, indicating the type of nickname that the team must adopt.

Jordaan, who could not clarify if the investigation includes public participation, said: “The name of the team must be embraced by the people.”

The association has a challenge to ensure that South Africa is able to nurture talent at grassroots level. It’s just waking up to the demand of facilities and training in townships and rural areas. It’s not only football that lacks user-friendly facilities in under-developed areas, but all sports codes.

Safa will use some funds from a World Cup legacy trust to bankroll development across the country. The US$100-million (R693-million) trust was announced in December 2010.

The Safa School of Football Excellence, located in Elandsfontein, east of Johannesburg, is expected to return to its former glory following a recent R3-million ($433 000) investment from Fifa. The school was once renowned for producing top football stars. The Fifa donation is meant to improve facilities, among other things.

Safa’s Grassroots Development Programme has seen its instructors going across South Africa and organising coaching clinics. “We’re on the right track [in addressing grassroots development]. Our technical director [Serame Letsoaka] has been throughout the country,” said Nematandani.

Jordaan said the replacement of privately owned supermarkets by major food retailers in South African townships has affected footballers’ development at a local level. The disappearance of shop owners has meant grassroots teams no longer have financial backers, he noted.