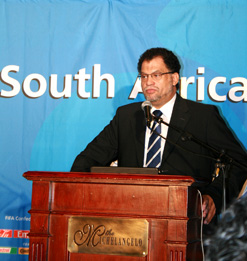 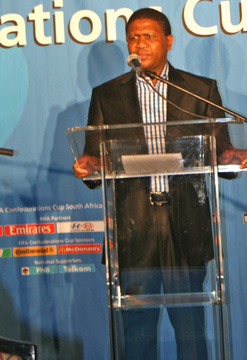 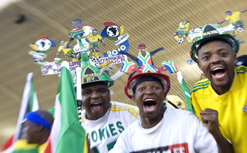 Danny Jordaan, head of the 2010 Fifa World Cup local organising committee, has told international and South African media that the 2009 Fifa Confederations Cup has been a great learning curve ahead of next year’s world tournament.

Speaking to the media during a round-table briefing where he shared the lessons learned during the Confederations Cup, Jordaan said the organising committee was pleased with the overall outcome of the tournament.

Jordaan was referring to calls from sectors of the international community to have vuvuzelas (a South African trumpet used at football games) banned as they are considered too noisy.

“The fans have been the real winners. The Egyptian team commented that the atmosphere was so great at their games, they felt like they were playing in Cairo,” said Jordaan.

The CEO said they also had the backing of Fifa president Sepp Blatter, who has been consistent in his support of South Africa hosting the two major sporting events.

Jordaan told journalists that the fans had played a big role in the Confederation Cup’s success. “Nation building is the core element of the tournament. Sport is celebrated across all sectors of South Africa.”

Deputy Minister of Police Fikile Mbalula addressed the issue of security for the Confederations Cup and the upcoming World Cup.

Mbalula echoed Jordaan’s sentiments, saying that from a security perspective, there was no major breach of security and that all reported cases were classified as unfortunate and regarded as isolated. “Government has spent R1.2-billion (US$124-million) on security. No country is going to do that if we are not serious about the safety of those attending games.”

In terms of weaknesses identified during the Confederations Cup, Jordaan noted that the late arrival of soccer lovers to the stadium had to be addressed to ensure that everyone is seated and ready by the time the game starts.

“Some go early, some go late. But when the game is over, they all leave at the same time, and this caused some congestion at the stadiums, but we are working on resolving the issue.”

To this end, Jordaan announced that the South African government is in the process of manufacturing 1 000 additional minibus taxis to transport fans.

Jordaan and Mbalula came under intense interrogation from international media who quizzed the two about incidences that had occurred during the Confederations Cup.

The case of the Egyptian football team in particular, who allegedly lost about R19 500 ($2 500) from their hotel, was widely reported.

The team reported that they were robbed of money and other valuable items.

“We are investigating this matter, and so far, we can say that this was an unfortunate incident,” said Mbalula.

This however did not impress journalists, who wanted official comment on whether the incidents could mean that security was a problem for those attending the tournament.

Jordaan implicitly assured journalists that a high-level security plan had been put in place not only at the stadiums, but also at the hotel rooms where the different football teams were staying.

Following allegations that the Egyptian team had invited prostitutes to their private hotel rooms, Mbalula cautioned that they could not protect the teams against such actions. “We also encourage people to take responsibility and not invite security unfriendly individuals to their hotels.

“However police are still investigating and we hope that the end product will be successful and bring the criminals to book.”

He said that while international media should report on incidences, they should verify the facts as not to create unnecessary anxiety for football fans intending on visiting South Africa next year.

“Judge us on what is actually happening, and not what you might have heard happened. Please report the facts.”

“I have been to many World Cup tournaments across the globe and there’s no difference with what is currently taking place in South Africa.

“In terms of safety and security, everything is running smoothly and no major crime related incidents were reported.”

Mbalula also added that he was proud of the police service. He said that cases brought before the department would be thoroughly investigated to prevent them from happening again next year. “We will investigate incidences case by case. We will have to check with the operation teams on the ground in terms of where we went wrong, and what we can improve.

“We take our lessons from here. Where there have been problems, we will strengthen them,” added Jordaan.