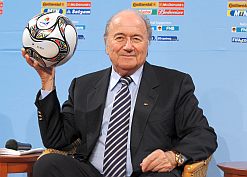 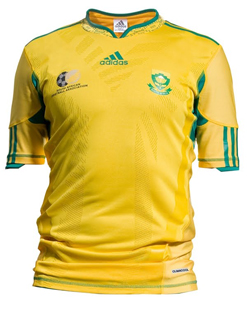 With 198 days to go until the first African Fifa World Cup kick-off, enthusiasm is mounting. Now global sportswear manufacturer Adidas is adding to the build-up with its newly launched Unite Mzansi Unite campaign.

The project is aimed at uniting all South Africans in support of both the football tournament and national team Bafana Bafana. The word Mzansi is isiZulu for “south”, and is commonly used to refer to South Africa.

Unite Mzansi Unite (UMU) is driven by the colour yellow – that is, the colour of Bafana Bafana’s official home jersey. South Africans are encouraged to step out in yellow and show their support of the home team.

Both the kit and the UMU drive were announced at this event, which took place in Newtown, Johannesburg. Former Bafana Bafana greats Marks Maponyane, Helman Mkhalele, Isaac Kungwane and Papi Khomane were there to represent the team.

To promote the campaign, the sportswear giant has created a huge replica of the official Bafana Bafana jersey, measuring 60m in length and 48m in width.

The jersey is currently touring South Africa in a large, specially branded Adidas truck and will make stops in all nine host cities, as well as towns in between.

The tour began at the headquarters of the South African Broadcasting Corporation in Auckland Park, Johannesburg, on 13 November, and is scheduled to end in May 2010, a month before the long-awaited tournament gets under way.

About 300 stops have been planned in total. The tour visits Cape Town in December, where the final draw for the World Cup will take place alongside the unveiling of the official match ball, another Adidas design.

A strong supporter of South African football, Adidas also designed the Kopanya, the official match ball of the 2009 Confederations Cup, which is viewed as a dress rehearsal for the World Cup.

Adidas South Africa MD Gavin Cowley said that like the Kopanya, the World Cup ball had a name, but it would be kept secret for a while longer.

“The World Cup official ball will be truly South African in colour and design,” he said.

A part of history

Deborah Miller, Adidas South Africa’s senior communications manager and UMU campaign head, said the call had gone out to all South Africans to show their support for the national team by signing the jersey when it is in their area.

“By signing the giant jersey, you will become a part of history,” said Miller. “This is our World Cup – let’s host it with pride.”

Fans who can’t make it in person will have the option of signing digitally online or via mobile, or at selected retail outlets. There are already over 9 500 signatures on the giant jersey.

Bafana Bafana themselves signed the jersey when the tour stopped off in Bloemfontein in the Free State province a week after it left Johannesburg. The national team was there to play a friendly against Jamaica.

Tour stops will coincide with other festivities such as football games on mini pitches and goal kicking competitions. A host of prizes will also be up for grabs.

Supporters can keep track of the tour’s progress by following its Twitter stream. The official UMU website also provides a detailed itinerary.

The design process for the new Bafana Bafana jersey took about two years, according to Safa.

In addition to input from Safa and the team, Adidas South Africa played a prominent role in its creation.

Football category manager at Adidas South Africa, Kevin Jooste, said: “We had to produce a jersey that unites the people of South Africa behind Bafana Bafana, and making the flag a prominent part of the jersey was the way to do it, as the flag unites all South Africans.”

Two versions are available – the “TechTit” or tight-fitting look, and the “ForMotion” variant, which is designed to mould naturally to the body of the wearer, and features elements such as different combinations of fabrics for greater flexibility, and special stitching to prevent friction. Both versions come in long- and short-sleeved styles.

Adidas’s TechFit Powerweb technology is also built into the shirt, which is lighter than a conventional shirt. This works by focusing energy produced by the muscles, to generate greater acceleration and power output. Adidas claims that wearing a Powerweb shirt and shorts increases a player’s power by 5.3%, with 0.8% increased endurance.

This is the team’s 16th national jersey in the past 11 years. It made its debut on 14 November during another friendly match against Japan in the 2010 host city of Port Elizabeth. Fans can buy it from sports retailers around the country, and at various online stores.