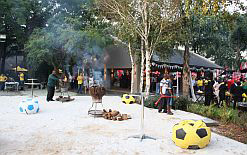 Football fans who want to feel the spirit and excitement of the World Cup but cannot get to the stadium can look forward to enjoying the game at the International Football Village (IFV) at Birchwood Hotel, east of Johannesburg, during the month-long tournament.

The IFV is a private venture initiated by Birchwood chief executive officer Kevin Clarence, together with South African and German business partners. Clarence said they came up with the idea to ensure that football fans enjoyed the sport in a friendly environment.

“The aim is to integrate South African people from all walks of life, giving them the opportunity to participate in the event while taking on the role of genial host,” he said.

German branding and communications expert Mike de Vries, chief executive of the IFV, previously worked in the organisation of the 2006 World Cup in Germany. He said they intend to create a home for international and local visitors at the village.

“The IFV is intended to be a platform for African hospitality, cultural exchange, international dialogue, and friendship,” he said. “It will be a central point whereby fans, visitors, corporate partners, their customers, and their employees can participate”.

Situated just seven kilometres from OR Tambo International Airport, the village will be assembled on a large open area at the hotel. An arena that can seat 2 000 people will be set on the site with a 12 meter screen for live game broadcast.

The village will be open every day from 11am during the World Cup with restaurants and pubs for fans to relax and socialise. “We will be offering entertainment such as the German Fan Mile, a Brazilian Caipi bar, a Bavarian beerhouse and an African shebeen (township beer halls),” said De Vries.

Those who want to put their football skills to the test can take part in the five-a-side tournament at the villages makeshift Maracan Stadium.

There will be performances by South African musicians before game, to highlight and celebrate African. Foreign visitors will get a feel of the South African way of watching football visitors with a treat of South African cuisines, such as dumplings (homemade steamed bread), pap (stiff porridge), and tripe served around the fire. This food is traditionally sold at shebeens where people watch games and outside stadiums where the games are played.

For a true shebeen experience beers will be served in quarts rather than the smaller bottles or in beer glasses. “As the host nation, we have a once-in-a-lifetime opportunity, to showcase true, warm South African hospitality,” said De Vries.

Julian Smith from Boksburg said he is excited about the village and looks forward to sharing the World Cup experience with fellow South Africans and foreign visitors. “The IFV will be a great place to enjoy the game, while celebrating African culture with fans from all over the world.”

Thabiso Thuso agrees. “I was not able to get tickets to the game but still want to see the games and interact with fans from all across the world. IFV gives us the platform to do just that.”

The IFV will have 50 corporate suites for companies to host their employees, guests and clients, and provide an opportunity for networking.

There will also be a media centre where press conferences will be held. Prior to the games, international football experts will be invited to offer post-mortems on games played the previous day. They will interact with the media and visitors, discussing and analysing matches.

“We invite patriotic South Africans and business leaders to join and support us for this chance to build unity; excitement; and morale within businesses and forge closer ties between our compatriots and with the world,” said Clarence.