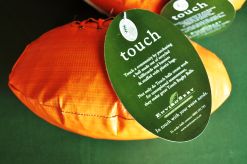 The balls are made of old billboard
material stuffed with plastic shopping
bags. 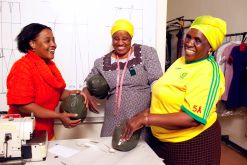 Unemployed women with sewing
experience are able to bring in an
income from the sale of the balls
(Image: CLE Communications)

Rugby is not normally associated with job creation and recycling, but a resourceful new project called Touch Initiative is teaching unemployed seamstresses to manufacture rugby balls out of old billboards.

Initiated and sponsored by Gauteng-based waste management company EnviroServ, the Touch Initiative hopes to use the momentum of the 2011 Rugby World Cup, currently under way in New Zealand, to create more awareness around the drive.

“This particular initiative will focus on rugby balls to tie in with the World Cup,” says Thurlow Hanson-Moore from Thewinwingroup, the advertising agency that conceptualised the project.

In time Touch will be expanded to create other types of balls and products, he says.

The emphasis of the Touch project is on job creation through innovative waste management.

According to EnviroServ’s marketing manager Delia Lavarinas, there can be no greater waste than that of wasted talent in South African communities.

“We also wanted to harness the energy around rugby in 2011, giving communities a tangible reason to get excited about the world cup.”

The campaign provides industrial sewing machines and training for unemployed women with a background in sewing. So far 20 seamstresses have been trained to make these balls, at six hubs in Mpumalanga.

Once the template is cut from the billboard material, women stuff the balls with up to 30 plastic shopping bags which have been reclaimed from the streets. This too represents an employment opportunity, as people are needed to gather the bags.

According to Hanson-Moore, response to the initiative has been enthusiastic, with orders of up to 1 000 balls streaming in.

“The idea is to get corporate support, and we are approaching the various rugby unions to get them involved as well,with a positive response.”

The plan is to roll the initiative out across the country, establishing employment hubs in all nine provinces. “We want to keep the drive going beyond the World Cup,” confirms Hanson-Moore.

EnviroServ’s core business is to provide innovative and sustainable waste management solutions for South Africa. The company has a number of corporate social initiatives on the go – one of them is the Intuthuko Sewing Project in Etwatwa near Springs in eastern Gauteng.

EnviroServ approached De Villiers to start the project as the company operates a waste management site in the area and wished to couple it with poverty alleviation in the nearby township. The project employs 35 women and one man.

In 2004 the Intuthuko project won an award for its magnificent Journey to Freedom embroideries. The women have since purchased a stall at the Rosebank Rooftop market and are doing exceptionally well.

The 7th IRB Rugby World Cup is underway in New Zealand and will conclude on 23 October with the final at Eden Park in Auckland. Nineteen other countries are battling to snatch the title of world champion from reigning champions South Africa, who walked off with the laurels at the previous competition in France in 2007.

South Africa and Australia are the only two countries who have been able to win the Web Ellis Trophy twice, and the national team, the Springboks, are campaigning to be the first team in history to successfully defend their title, as well as to win it three times.

The Rugby World Cup is now established as the world’s third biggest sporting event after the Olympic Games and Fifa World Cup. In recent years it’s achieved its goal of merging the traditional rugby powers with new and emerging nations to make it a truly worldwide sport, according to the world cup website.

The competition takes place every four years under the auspices of the International Rugby Board. England will host the competition in 2015 and Japan in 2019.