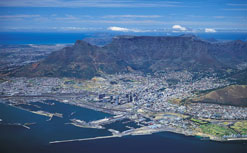 2010 host city Cape Town is getting an
advanced integrated rapid transport
system, just in time for the World Cup. 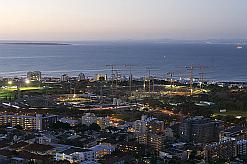 The Green Point stadium construction site.
The stadium precinct will link to the city
centre, airport and residential areas in the
city bowl.

In May 2008 the City of Cape Town unveiled plans for a world-class integrated rapid transport system. Now the first phase has received the green light and will be operational by March 2010, say city authorities. The entire four-phase project will be implemented over the next 10 to 12 years.

An integrated rapid transport (IRT) system brings various modes of public transport together into a united effort, and takes priority over private transport.

“In the context of our goal of infrastructure-led economic growth and job creation, this is possibly our single most important project,” said Cape Town mayor Helen Zille, recently voted the world’s top mayor for 2008 by the London-based World Mayor Project.

“The 2010 Football World Cup is our chance to show the world what we are capable of as a city and as a nation,” commented Zille. “It is one of our best opportunities to market Cape Town as an investment and tourist destination. It is also an important opportunity to fast forward a few years in infrastructure investment, and create a lasting legacy for our citizens.”

Cape Town’s IRT system will bring the city up to the required standard for the national Department of Transport’s 2010 host city transport operations plan, as well as the host city agreement signed with Fifa. These plans will make maximum use of existing transport resources, ensuring that security and emergency response strategies are in place, and catering to those with special needs.

However, Cape Town citizens will benefit from the new system for many years to come. The initial Phase 1A is designed to demonstrate the system’s capabilities and garner maximum public support ahead of the expansion into the full Phase 1 plan. Each phase has been designed to be financially self-sustaining independent of any future development.

Cape Town’s system largely involves an efficient and reliable bus service that will run in two parts – main or trunk routes and feeder routes. The trunk routes will feature dedicated bus lanes, in most cases in the middle of the road, for special 18m articulated vehicles. These vehicles will feature wide doors to allow many people to embark and disembark simultaneously into weatherproof stations, while fares will be collected beforehand using smart cards at station entrances.

The emphasis is on easy access between the system and other transport options such as bicycles, taxis and walking, as well as convenience for children, the elderly and the disabled. In addition, vehicles will feature clean, low-noise technology and the whole system is designed as an environmental showcase for Cape Town.

The feeder services will connect communities with trunk routes using use smaller 8m and 12m vehicles running on normal streets. Passengers will pay with smart cards as they board. These services are expected to run for longer hours than the city’s current public transport systems.

Linking the city and communities

The R1.3-billion ($130-million) phase 1A will link Cape Town International Airport and the inner city with the Green Point stadium precinct, a requirement of Cape Town’s status as 2010 host city. Key destinations in the city include Central Station, the V&A Waterfront, Long Street, Sea Point, as well as Hout Bay. Nearby residential areas such as Tamboerskloof, Oranjezicht, Vredehoek and Gardens will be serviced by the feeder system.

The inner city service will provide an affordable and convenient way of getting around, not just for the millions of tourists who are expected to pour into South Africa’s host cities during the weeks of the Fifa World Cup, but also for the many thousands of people who live and work in Cape Town’s city bowl.

The airport link will provide rapid, high frequency services between the airport and the city centre, Green Point and Sea Point via the N2 freeway’s dedicated bus and minibus taxi lane, which went live on 1 August 2007. The bus lane is already proving to be a great success, getting city commuters to their destinations with a 20 minute saving over previous journey times.

Phase 1A will also reach out to high-density residential areas and low-income communities up the west coast, including Bloubergstrand, Table View, Mamre, Atlantis, Doornbach and Du Noon. Many of these communities currently have no sustainable public transport option to boost employment and the new service is expected to breathe new life into the region as well as alleviate high levels of traffic congestion closer to Cape Town.

The next three phases will cover the northern and southern suburbs and the Cape Flats communities of Mitchell’s Plain, Khayelitsha, Delft and Blue Downs, as well as the university town of Stellenbosch, located about 50km from the Cape Town city centre.

In order to ensure that public needs and concerns are met, the City is holding a series of information meetings during October and November 2008. The meetings will involve communities, people and businesses affected by the first phase.

City authorities are also working to provide all existing bus and minibus owners the opportunity to participate in the Cape Town IRT system.