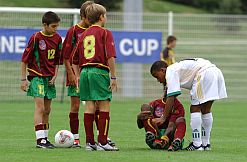 Fifa has donated R3-million (US$437 655) towards reviving South Africa’s Football School of Excellence, which was once a breeding ground for top-quality players who went on to join the country’s national squad, Bafana Bafana.

The school was set up in 1994 in Elandsfontein, east of Johannesburg, and is run by the South African Football Association (Safa).

Fifa’s donation will come from its Goal Project Funding initiative, which helps national football associations around the world establish centres, natural and artificial pitches, and schools that develop players of the Beautiful Game.

Over the years Safa’s school has produced some of the country’s best football players – one of which is Steven Pienaar, who now plays for English Premier League club Everton and South Africa’s national team.

Safa said it hopes the proceeds from Fifa will help the school improve its finances and leadership so it’s once more able to produce top-quality football stars.

“In the past few years we had a problem where the school was no longer attracting quality youngsters, players who would do well for our junior national teams,” said Safa’s deputy president Mandla Mazibuko.

But, he said, there have been some recent improvements. “Everything is back on track at the school. We had trials all over the country in 2010. We are now going for quality again.”

“If you look at a number of players who went through the school of excellence, they have done very well. They were well developed and that is what we want to concentrate on,” said Safa chief Leslie Sedibe.

The school – which offers grades eight to 12 – currently has 112 pupils, seven teachers and four coaches. Safa is hoping to increase the number of instructors to seven to bring the coach-player ratio to more favourable levels.

Safa says it will need a total of R80-million ($11.6-million) to fully transform the academy. “We will apply for Fifa’s R3-million grant every year until the school becomes a state-of-the-art facility,” Mazibuko said.

Fifa’s 2011 contribution will be used to upgrade the school’s gym, kitchen, dormitories, administration and coaches’ block, and fields. Extra computers with internet connectivity will be set up in the library to enhance the school’s academic support system.

Safa plans to invite overseas football experts to hold workshops at the school to groom the budding stars and prepare them for representing South Africa in future Fifa World Cups.

The county’s Department of Sport and Recreation will donate table tennis and pool tables to keep the pupils entertained off the pitch. The departments’ 2010 legacy division has also committed to establishing a medical centre at the school, which will give pupils access to a psychologist.