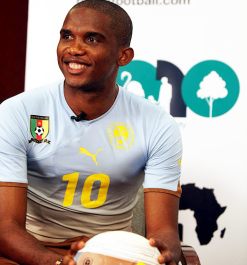 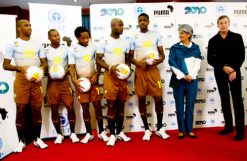 Top sportswear manufacturer Puma has designed a football kit for the African continent – and as part of Puma’s Play for Life environmental initiative, the Africa Unity kit is also raising awareness among football fans about the importance of caring for the planet.

Play for Life, launched in Nairobi, Kenya, in January 2010, sees Puma partnering with the UN Environment Programme (UNEP) to celebrate the International Year of Biodiversity, support biodiversity, and boost species and habitat conservation in Africa.

The strip is Fifa-approved, and as the official third kit it can be used when a team’s home or away kit is likely to cause confusion with the opposition.

It also stands as a symbol of unity and diversity, as it is the first kit ever to be shared by so many national teams.

Players will show off their snazzy new gear during international friendly matches leading up to the 2010 Fifa World Cup, taking place around South Africa between 11 June and 11 July.

It is hoped that the Togolese national team, which fell victim to a deplorable shooting attack just before the start of the tournament and has since returned home, will rejoin the group shortly.

Africa is home to nine of the planet’s 35 biodiversity hotspots, many of which are under threat.

The continent also harbours two of the five most important wilderness areas on earth – the Congo Basin, and Southern Africa’s Miombo-Mopane woodlands and savannas, which spans 10 countries and is considered to be the largest known contiguous area of dry woodland.

Speaking at the Play for Life launch, Puma CEO Jochen Zeitz said: “Biodiversity and therefore valuing and protecting all life on our planet is a huge issue, not only in Africa, but around the world.”

He added that the sportswear giant was proud to partner with UNEP to raise both awareness and funds, as all proceeds from the worldwide sale of the replica kit, as well as Puma’s other Unity products, will be used to support biodiversity projects.

The Unity range includes clothing, shoes and accessories inspired by the work of American artist Kehinde Wiley, whose designs have been incorporated into the trendy items.

Cameroon’s national football team, the Indomitable Lions, attended the launch. Team captain and Internazionale striker Samuel Eto’o said the new kit was an inspiration to him and his team.

“Not only are we very proud to wear a shirt that helps bring the continent of Africa together, but to do so for such an important cause is truly an honour,” he said. “Supporting the Africa Unity Kit sends out a positive message for Africa – we are uniting as a continent to help life and the planet.”

The strip features earthy colours and elements of nature, designed to inspire and educate.

At the shoulders the shirt is a light blue, but further down there is a gradual transition from blue to a rich brown – this represents the African sky and earth. Actual soil samples from Ghana, Ivory Coast, South Africa and Cameroon were the source of the brown tone, which is smoothly and seamlessly carried through to the shorts.

The shirt is further adorned with Puma’s yellow Life badge, while other elements – such as the Puma mascot and the player’s number – are also in yellow to represent the African sun.