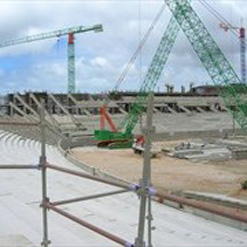 Port Elizabeth stadium
is still in the running to host
Confederation Cup matches in 2009.
(Image: Fifa)

Following inspection tours of the five stadiums that are being prepared for the 2010 World Cup by Fifa and the Local Organising Committee (LOC), it was announced that all stadiums being used for the main event will also be considered for the Confederations Cup in 2009.

This was particularly good news for the Nelson Mandela Stadium in Port Elizabeth as concerns over its readiness to host Confederations Cup matches were raised during an inspection in November 2007, and in March this year the board of directors kept a watchful eye on Port Elizabeth. The R1.2 billion stadium with a 48 000 seating capacity is the only one being built from scratch and has been given until March 2009 to complete construction while the deadline for the other stadiums is December 2008.

Speaking at a briefing following a marathon two-day board meeting, Irvin Khoza, chairman of the LOC, said the decision to retain Port Elizabeth as one of the host cities for the Confederations Cup was buoyed by the acceleration of construction since concerns were first raised.

“At this stage all five stadiums are still in. We are placing tight monitoring on all of them and if by any chance any of them fails to comply with the agreed deadlines, they will be removed from the Fifa Confederations Cup schedule,” says Khoza. “Port Elizabeth is a new stadium and that’s why we have been patient with them. Recently they accelerated the process, which gives us comfort. That the Fifa Confederations Cup is a success is a matter of national pride.”

To ensure that stadiums are delivered according to Fifa technical requirements and timelines, the progress of all five stadiums will be closely monitored by the LOC Technical Team. The department of Sport and Recreation and the Department of Public Works will also join in the monitoring.

The 2009 Confederations Cup, or the Cup of Champions as it is commonly known, will take place in South Africa from 14 to 18 June. It is contested by the winners of each of the six Fifa confederation championships including the 2006 world champions Italy as well as winners of Fifa’s European and Asian tournaments.

It is imperative that the deadlines given to the stadiums are met as tickets can only be sold once seat locations are known. The match draws will take place in November and tickets will go on sale soon afterwards.