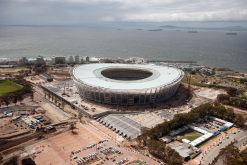 The Cape Town Peace Cup will usher
in 2010, the year of the first African Fifa
World Cup, in style.
(Image: City of Cape Town)

RELATED ARTICLES
• Star-studded concert for 2010
• Football for Hope to unite SA
• Get kitted for Football Fridays
• Artificial fields for SA footballers
• 2010 to give SA a $2.5bn boost

The inaugural Cape Town Peace Cup, a joint initiative of the City of Cape Town and the Nobel Peace Centre in conjunction with the South African Peace Conference organising committee, will usher in 2010 and the much-anticipated Fifa World Cup.

The Peace Cup, which kicks off on 26 November 2009, will see eight of the best under-19 football teams – four from South Africa and four from overseas – pitted against each other for the top prize. The goal is to promote awareness of the crucial role sport plays in breaking down barriers and bringing about peace, harmony and a more tolerant society.

The tournament also overlaps with the long-awaited final draw for the Fifa 2010 World Cup, which takes place in Cape Town on 4 December 2009.

Norwegian Kjitil Siem, currently president of South Africa’s Premier Soccer League, is credited with bringing the Nobel organisation on board. Siem is also CEO of the Peace Conference.

“We are honoured to have this calibre of teams participating in this tournament,” said Siem.

“The message of peace and harmony needs to be spread across the world through every possible medium, and football can play a huge part in ensuring this.”

The Peace Conference, scheduled to take place in Johannesburg earlier in 2009, got off to a shaky start when the Dalai Lama of Tibet was refused entry into the country in order to attend.

Various reasons were given, including the fact that the request did not come through official government channels, that he would use the event as a platform to promote his own agenda, and simply that his presence would detract from the main aim of the conference.

The resulting furore created more negative publicity than the revered Tibetan leader’s presence ever would have, and the event was postponed.

The Peace Cup group draw took place on 9 October at the Nobel Peace Centre in Oslo, Norway, coinciding with the announcement of US president Barack Obama as the 2009 Nobel Peace laureate.

Group A includes local teams Ajax Cape Town and Santos, as well as Stabaek from Norway and Boca Juniors from Argentina. Group B features SuperSport United and Orlando Pirates from South Africa, as well as the UK’s Chelsea, and Eintracht Frankfurt from Germany.

Fixture details will be announced later, but games are scheduled to take place at Athlone Stadium, Erica Park in Belhar, and Stephen Reagan Sports Complex in Mitchells Plain. All venues are located in suburbs on the so-called Cape Flats, a culturally vibrant but economically poor area on the outskirts of Cape Town which is earmarked for development.

“Our focus at the Nobel Peace Centre is respect, equality and brotherhood. Football can create fellowship that transcends all national boundaries and for us this is key,” said Erichsen.

The opening ceremony will take place at Cape Town’s spectacular Green Point stadium on 26 November, with the King and Queen of Norway in attendance as guests of honour. Later the proceedings will relocate to Athlone stadium for the opening game.

The ceremony also coincides with the opening of the $580-million (R4.3-billion) Green Point stadium, a 2010 venue that is in the final stages of construction. The stadium will be officially handed over to the City of Cape Town on 14 December 2009, and building is well on track to meet that deadline.

While the tournament plays out, football fans and history buffs will be able to pop in to the concurrent Nobel Peace Exhibition at the Iziko South African National Gallery in the Company’s Gardens near the Parliament precinct in Cape Town.

Visitors to the exhibition will also learn of South Africa’s transition from apartheid to a thriving democracy, a shift that many around the world have hailed as “miraculous”. The country’s role as host of the first-ever Fifa World Cup to take place on African soil will be highlighted.