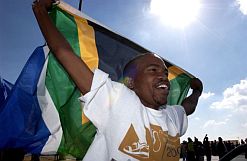 Ecstatic football fans celebrate after the
announcement on 15 May 2004 that South
Africa would host the 2010 Fifa World Cup.
(Image: GCIS. For more free World Cup
photos, visit the image library.) 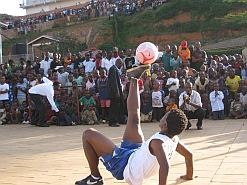 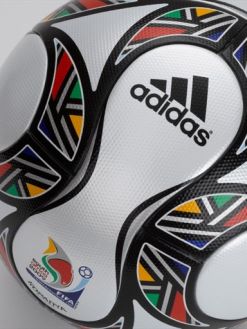 The Kopanya is the official ball of the 2009
Confederations Cup. (Image: Fifa) 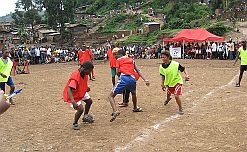 The Rwandan Football for Peace initiative
sees co-ed teams playing without a ref,
and solving disputes on their own.
(Image: Tiziano project) 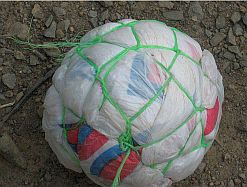 Football for Peace teams use a ball made
from banana leaves or plastic bags, tied up
with string. (Image: Tiziano project)

South Africa’s national Department of Sport and Recreation has partnered with the Pretoria-based Youth Development through Football and other NGOs to form the Peace Caravan, an initiative that will tour the Great Lakes region of Africa during March 2009 to promote the 2010 Fifa World Cup.

The project is called the Caravanamani (Swahili, meaning peace caravan) and it kicked off in Kigali, Rwanda, on 14 March for the first leg of the trip, a 320km journey to Bujumbura in Burundi.

Zakumi, the green-haired leopard and official mascot of the 2010 World Cup, graced the Caravanamani launch with his presence, making his début appearance in Rwanda.

The caravan will spend three weeks travelling through Burundi, Uganda, Kenya, and Tanzania before heading back to Rwanda.

The goal of the initiative is to promote friendship between nations through sport, and build a sense of African pride and ownership ahead of the 2009 Confederations Cup and the 2010 World Cup. Both events take place in South Africa, with the Confederations Cup serving as a prelude to the long-awaited global football tournament.

Along the caravan’s route, fans will be treated to sporting and cultural events such as football games and theatre and music performances, all designed to instil a sense of excitement and anticipation for the two major events taking place shortly on African soil.

They can also get up close and personal with a number of football greats, including Mark Fish and Phil Masinga from South Africa.

“There is only one country that will host this World Cup and that is South Africa,” commented Fish, “but the World Cup in South Africa is for all Africans – we want the people of Africa to own the World Cup. The Caravanamani trip will make people aware that we’re bringing the World Cup to the continent.”

The former Bafana Bafana defender added that every African is a part of the World Cup, and it is up to the people of Africa to unite behind the event and ensure its success.

Youth Development through Football is an initiative of the German Technical Co-operation, and aims to fight discrimination, improve health, and foster development and peace amongst African youth, using football as a vehicle.

The Peace Caravan is also supported by the Local Organising Committee of the World Cup as well as the Rwandan Ministry of Sports and Culture.

Besides the organising bodies, the delegation will feature a number of youth groups, with each group representing one of the six partner countries of Kenya, Rwanda, Burundi, Uganda, Tanzania and South Africa. A prerequisite is that each six-member group is gender-balanced.

Groups have specific roles to play within the Caravanamani framework. These roles include the football forum theatre, street style football, sketches and stand-up comedy, a marching band, pop music, and jazz-dance. Also integrated into the programme are a series of life skills components, which are delivered through workshops, training seminars and presentations.

The caravan will return to Kigali to bring down the curtain on 29 March.

South Africa’s 1Pal initiative, a sport upliftment programme based on the local street soccer style, was involved in recruiting the local stars for the caravan. Many South African football stars learned the basics of the Beautiful Game on their hometown streets, often with makeshift equipment. Because the six-a-side game can be played anywhere it has become something of a breeding ground for football hopefuls.

The entire Caravanamani project is co-ordinated by the Rwandan NGO Esperance. Founded in 1996, the organisation’s main goal is to encourage reconciliation and social inclusion in the once war-torn country, by engaging with youth groups and other associations on all levels.

Esperance is active in the Great Lakes region with its innovative Football for Peace programme, where teams of three girls compete against three boys – however, only the girls may score. Each 10 minute-long game is played with a traditional ball made out of banana leaves or bags tied with string and, with no referee, players have to work together to solve conflicts.

The organisation is, in fact, also doing a great deal to clean up the city of Kigali, as it pays residents to make soccer balls out of bags they pick up in the streets. Balls made from plastics are more durable than the traditional banana leaf ball.

Caravanamani forms a part of the Department of Sport and Recreation’s Mass Participation Programme, launched in January 2009. The aim of the programme is to ensure that all South Africans experience the excitement of the 2010 Fifa World Cup, by encouraging and supporting sport in communities throughout the country. The programme is supported by local football greats Mark Fish, Phil Masinga, Doctor Khumalo and Desiree Ellis, South Africa’s first female Fifa-accredited referee.

There are plans to launch another Caravanamani if this one proves successful.