Team South Africa is ready to take on the world at the 14th Paralympic Games in London. 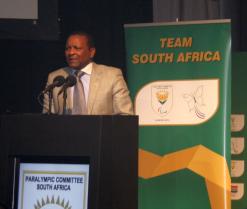 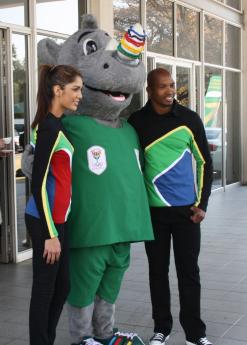 Converse sneakers and all – the ensemble to be worn by the Olympic and Paralympic athletes at their respective opening ceremonies.
(Images: Janine Erasmus)

Team South Africa for the 14th Paralympic Games has been announced in Johannesburg – the 61-strong squad will cover seven disciplines, including athletics, cycling, rowing, equestrian, swimming and wheelchair tennis and basketball.

Making the announcement, South African Sports Confederation and Olympic Committee (Sascoc) president Gideon Sam urged the team to stay focused and keep their attention on the work at hand.

He praised the team for its consistently stellar performance over the years.

“The Olympic team may have been subject to criticism now and then, but our Paralympians have always done us proud. They’ve brought glory to the country time and again,” he said.

Sam said that the 66 athletes of Team SA at the 2008 Beijing games brought back 30 medals, of which 21 were gold – this placed them sixth on the overall medals table.

The minister of sport and recreation, Fikile Mbalula and his deputy Gert Oosthuizen were also in attendance.

Brand South Africa CEO Miller Matola sent his best wishes to the sport stars. “Their inclusion in the team is a testament to their excellence on the sporting field.”

The London Paralympics gets underway on 29 August and ends on 9 September.

Also at the team announcement, the designer kit to be worn by the Olympic and Paralympic teams at their respective opening ceremonies, was unveiled.

Durban designer Leigh Schubert’s chic creation was chosen as the winner by the nation, out of a line-up of six finalists who were presented to the public for their consideration a few months ago. The public, who also voted for Chukuru the rhino as the official team mascot, were asked to vote for their favourite opening ceremony ensemble.

There are 25 athletes, 10 swimmers, six cyclists, four equestrians, one rower, 11 wheelchair basketball players and four wheelchair tennis players. The Chef de Mission is Pieter Badenhorst, and managers, coaches and other support staff make up the rest of the squad.

Andy Scott, former CEO of the National Paralympic Committee – which has since been incorporated into Sascoc – and a Paralympic swimmer himself, said that in all, South Africa boasts 139 Paralympic medals.

“Our athletes have brought 63 gold, 37 silver and 39 bronze medals back to this Rainbow Nation,” he said to the applause of the audience, adding that stars such as javelin champion Zanele Situ, Pistorius and Du Toit have done exceptionally well in putting South Africa ahead of other nations in this field.

Sam said that it was now the Paralympic team’s turn to grab the limelight. He also thanked the sponsors for their support, saying that their loyalty has been repaid by the many medals won by South Africa’s para-athletes.

The full Team SA for the 2012 London Paralympics: