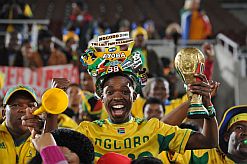 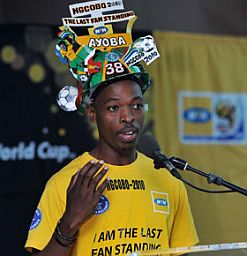 As the 2010 Fifa World Cup kicked off, one avid South African football fan began a record-breaking attempt to attend 38 out of 64 matches.

The 29-year-old Thulani Ngcobo, from Soshanguve township, began his countrywide trip to stadiums in all nine host cities at Soweto’s Soccer City on 11 June, where hosts South Africa and Mexico faced off in the opening game.

The staunch Kaizer Chiefs fan has an opportunity to watch 38 matches live, with all expenses paid, thanks to the MTN Last Fan Standing competition he won late 2009. Ngcobo, a supply chain practitioner at the Department of Rural Development and Land Reform, beat other fans in a 40-question multiple choice test to scoop the prize.

He’s also set to break a Guinness World Record for the most Fifa World Cup matches attended by an individual. The current record is 20 matches, and Ngcobo is confident that he’ll smash it.

“Standing a chance to break a world record is a dream come true,” he said. “This is something that I will be recognised for.”
Local mobile services provider MTN confirmed in 2009 that Guinness World Records has endorsed Ngcobo’s attempt.

Ngcobo 2010, the sobriquet he’s picked up, watches at least two matches a day, shuttling from stadium to stadium. He had already been to five matches by the morning of 14 June, and was preparing for matches in Johannesburg and Cape Town.

“Running from stadium to stadium is not an easy task. It needs passion for football,” he said.

A taxing journey awaits him, with 17 000km across South Africa to cover. He has tickets for 28 group and four Round of 16 matches, two quarter finals, two semi finals, the third and fourth place playoff, and the final. By the end of the tournament he would have seen about 30 teams in action.

Fatigue is of little concern to him. “I may feel tired at times, but when I’m inside the stadium watching a match I’m freshened up,” said Ngcobo.

He’s seen scintillating football played in his home country in the first three days of the tournament. He enjoyed the opening match, where Bafana Bafana drew 1-1 with Mexico. “It was fantastic to have seen that game on African soil.”

But his best moment so far is Ghana’s 1-0 defeat of Serbia. The atmosphere in Pretoria was “great”, he said.  He was also amazed by the support the Ghanaian Black Stars received from South Africans and other Africans.

“The support for Ghana was awesome,” said Ngcobo. “We were so happy that Ghana, an African team, had won. We celebrated all the way.”

Ngcobo should not struggle to reach his goal. An ardent football fan, he usually attends at least four local premier league games every week, and follows his favourite team Kaizer Chiefs all over the country. He attended all Bafana group stage matches, the third place game and the final, at the 2009 Fifa Confederations Cup.

Before winning the Last Fan Standing competition, Ngcobo had planned to buy tickets for 10 matches, which would have seen him spend more than R2 000. “I’m thankful to MTN,” he said.