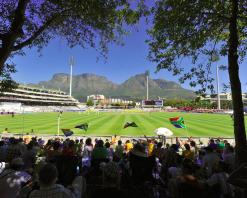 Cricket fans keep an eye on the game
from the shade of the Oaks Enclosure.
(Image: Supersport) 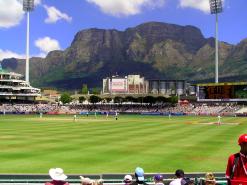 The local fans have known it for years, and now it’s been confirmed – a combination of spectacular scenery and world-class facilities has seen the historical Newlands cricket ground in Cape Town voted as the second-best test venue in the world.

The Western Cape sporting ground is remarkable for its backdrop of Table Mountain and Devil’s Peak and is a firm favourite with cricket fans around the world.

It was topped only by the venerable Lords cricket ground in St John’s Wood, London, described by The Cricketer magazine, which published the list of superlative stadiums in its May edition, as the “alpha and omega of cricket venues – the venue upon which every cricketer yearns to leave his mark”.

The Adelaide Oval in Australia completed the top three.

“This is an important endorsement of a place that special meaning for both Capetonians and South Africa cricket,” said Western Province Cricket Association CEO Andre Odendaal in a statement, “and we’re proud to have maintained our high ratings in world cricket.”

Test cricket is the five-day version of the game, which is also played in two shorter formats, the one-day and 20-over or T20 games.

Best of the best

A team of journalists, photographers, broadcasters and fans decided the final order out of 26 venues offered, after a survey was run by the UK-based The Cricketer, previously known as The Wisden Cricketer. According to the article, Lord’s was the unanimous choice for number one.

The results of the survey put the 26 contestants in the following order:

Port Elizabeth’s St George’s Park, famous for its lively brass band that gets the spectators going during limited-overs games, and the imposing Wanderers in Johannesburg, known fondly as the Bullring, were the other two South African venues.

The International Cricket Council recognises only 10 test-playing nations – they are the full members – with 36 associate members and 60 affiliate members. All 10 of the full members, which include Zimbabwe and Bangladesh, are represented in The Cricketer’s list.

Most of the grounds are in locations familiar to cricket fans, and those who are puzzled by the presence of the Sheikh Zayed Stadium in Abu Dhabi will be enlightened to know that it’s operated by the Pakistan Cricket Board as a safe alternative to its stadiums at home.

Newlands cricket ground – not to be confused with the next-door Newlands rugby stadium – was first owned by Lydia Corrina Letterstedt, the daughter of Swedish brewer Jacob Letterstedt. The brewer had been granted the title deed in 1845 and he gave the land, originally a farm, to his daughter as a wedding present.

The Newlands brewery still operates today. In Letterstedt’s day it was known as the Mariendal Brewery and became part of South African Breweries in 1956.

In the late 1880s the Western Province Cricket Club learned that the grounds next to the Newlands station, which today is within walking distance of the cricket and rugby grounds, were available to rent or buy. In need of new headquarters around the same time, the Western Province Rugby Union also found the site optimal. At the time the ground was still part of Lydia’s Mariendal Farm.

In August 1887 the grounds were levelled and on 2 January 1888 the cricket venue was opened with a match between the Mother Country and Colonial Born elevens. The match lasted two days.

The cricket club bought the ground in 1896 for what was then three thousand pounds. In 2000 it was sold to the Western Province Cricket Association, who had been renting it all along, for R33-million (US$4-million). The cricket club today owns the ground’s Member’s Pavilion, and the association owns everything else.

Supporters of the growing sport watched South Africa take on England on 25 March 1889 in the first test match ever held at Newlands. Unfortunately the English beat the local lads by an innings and 202 runs, but their dominance wasn’t to last long.

In 1902 the pine trees along Campground Road were replaced with oaks, and today, after many decades of growth, this shady spot is known as the Oaks Enclosure and is a fine vantage point from which to relax while watching a game. At the same time new pavilions were added to accommodate 10 000 people.

The venue has undergone much expansion since then. The ground can accommodate around 25 000 spectators, and the home crowd is renowned for its enthusiasm and passion for the sport.

In 2003 Newlands hosted the opening game of the Cricket World Cup, and it also hosted games during the 2007 T20 World Cup and the 2009 Indian Premier League.

The Cape Cobras have been the home team since 2005. 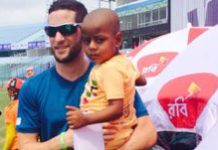 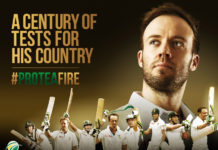