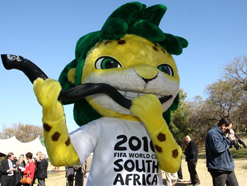 Building on the popularity of the iconic
vuvuzela, South African National Parks,
First National Bank and a local vehicle
component company have teamed up to
bring sports fans another instrument to
pump up the volume at football matches,
the spiralled kuduzela.

When the novelty of trumpeting on a vuvuzela wears off, South African sports fans can apply their lips to a different kind of wind instrument, the kuduzela, inspired by the spiral horn of the kudu antelope.

The new instrument, said to mimic a bellowing elephant, is the result of a joint effort between South African National Parks (SANparks) and First National Bank (FNB), and has been rolled out just in time for the 2010 Fifa World Cup.

SANparks chose the kudu horn model as it has great historic significance for African communities.

“Traditionally, in some African communities, the kudu horn has been used as an instrument to call people together for gatherings at the royal house or for a community imbizo [a meeting], but most importantly as a call to battle. Now the kuduzela will fulfil the same role,” said Dr David Mabunda, chief executive officer (CEO) of SANParks.

“The kuduzela will call all South Africans, international guests and soccer fans to South Africa for what is set to be a spectacular tournament in 2010 and, appropriately, it will be calling the ‘warring parties’ to the symbolic battlefield of soccer,” he added.

AK Stone Guard, a vehicle component manufacturer based in the industrial town of Vereeniging on the outskirts of Gauteng, has set up a separate division called Kudu Kudu Manufacturing to make the kuduzelas.

The company got involved in the project as a result of the economic downturn and consequent slowdown in vehicle production. As business was quiet, the owners started looking for innovative ways to keep the plant operational and their staff employed.

With some careful planning, a section of the plant was modified to manufacture the kuduzelas.

Reynold Thakhuli, media relations general manager for SANparks, said that through the project the company has managed to retain 25 jobs.

“These people would have otherwise faced retrenchment,” he said.

AK Stone Guard managing director Gary Immelman is optimistic that more workers will be employed as kuduzela production increases ahead of the World Cup.

The kuduzelas are mostly made of recycled plastic from the vehicle plant.

To ensure that the kuduzela looks authentic, a real horn was used to produce the mould. Thakhudi said the original horn was taken from a kudu that died of old age in the Kruger National Park.

Not only is the project saving jobs, it will also boost conservation education in South Africa.

A percentage of the manufacturing cost of each kuduzela will be donated to the Kids in Parks conservation project – an education programme which helps children explore South African national parks and understand their place in the natural and cultural world.

“SANparks chose this project because it is important to educate children from an early age about conservation issues,” Thakhudi explained.

FNB CEO Michael Jordaan said the bank has committed itself to donating 6.24% of the cost of every kuduzela produced to SANparks for the Kids in Parks project.

If you’re itching to get your hands on a kuduzela, and are an FNB customer, you can enter a draw to win one. Simply make three or more prepaid airtime purchases per month by dialling *130*321# to stand a chance of winning.

Until the end of September 2009 FNB has the exclusive rights to the kuduzelas for their airtime competition, but after that the horns will be available at Makro outlets, Pick ‘n Pay and Kruger National Park camp shops.

If you’re an ardent fan of the trusty vuvuzela, don’t worry about them being phased out or playing second fiddle to the new kuduzela.

SANpark’s Thakhudi explained that the kuduzela wouldn’t replace its well-known cousin at football games. It will just bring a unique South African flavour to stadiums during sports events, especially next year’s World Cup.

“The kuduzela will sound like a herd of elephants trumpeting and we hope that the two instruments will enhance each other,” he said.

• Do you have any queries or comments about this article? Email Mary Alexander at marya@mediaclubsouthafrica.com