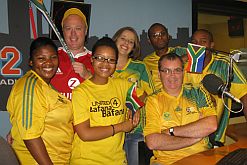 Football Fridays united South Africans as
they wore their football jerseys to show
support for the national team Bafana
Bafana during the 2010 Fifa World Cup. The
country will now be using that same united
spirit to get behind the Proteas, ahead
of the ICC Cricket World Cup.
(Images: Big Media)

South Africans are using the legacy of the 2010 Fifa World Cup to show their support for the country’s cricket team ahead of this year’s Cricket World Cup, which starts in February.

Initiated by the Lead SA campaign, which encourages South Africans to make a difference in their various communities, Pure Protea Fridays take place at the end of every working week.

South Africans are encouraged to mark these days by wearing a Proteas cricket shirt to show their support for the team in the build-up to and during the Cricket World Cup.

The idea stems from Football Fridays in 2010, when South Africans donned football jerseys at the end of every week to rally behind national squad Bafana Bafana.

There’s been an enthusiastic response to Pure Protea Fridays following its official launch on 10 January.

“We united for the Springboks in 2007 and they won the Rugby World Cup, we united for Bafana Bafana in 2010 and we hosted the most amazing Football World Cup. Let us do it again in 2011 for the Proteas,” said Richard Holeness from Johannesburg.

“I am going to buy myself a Proteas top and get ready to show my support,” said Tamryn Graeme from Linden in northern Johannesburg.

“Football Fridays brought about such amazing spirit – I hope we can continue with that same spirit and pride in our country with Protea Fridays.”

Sifiso Mbembe, from Diepkloof in Soweto, south-west Johannesburg, agrees: “Im not a cricket supporter as such, I know very little about the sport, but I am a South African and anything that has to do with showing pride and support for our country gets my vote.”

“There is something powerful about having your country behind you when competing in an important event such as a world cup. I think the nation’s support has a unique magic about it – it can really will teams into victory,” Mbembe added.

Cricket South Africa (CSA) has also welcomed the initiative: “CSA supports any initiative that is 100% behind the Proteas,” said the organisation’s CEO Gerald Majola.

“Let’s lead the Proteas to victory,” said Charlotte Lombard from Howick in KwaZulu-Natal. “I’m excited that we are carrying the spirit and legacy of the Fifa World Cup through to other sporting events that continue to bring us together as South Africans.”

Yusuf Abramjee, head of Primedia which came up with the Lead SA initiative, said: “The Football Fridays initiative united the nation and created patriotism. Our intention is to do the same for cricket.”

Lombard said she would be travelling with her husband to attend some of the Proteas’ matches during the tournament co-hosted by India, Sri Lanka, and Bangladesh. “We are huge cricket fans and are excited about going to watch the Proteas play. Let’s go Proteas!”

South Africans can get themselves official Proteas supporters’ shirts from sports shops around the country or through the CSA website.