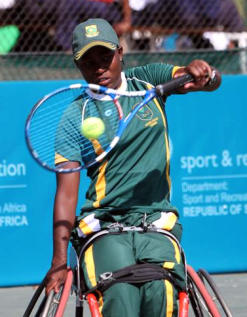 South African wheelchair tennis star Kgothatso Montjane made history again when in 2013 she became the first African player to compete in the invitation-only women’s draw of the Australian Open wheelchair championships.

Montjane, known as KG, rewrote the record books in 2012 by becoming the first player from the continent to qualify for both the NEC Wheelchair Tennis Masters and the Invacare Doubles Masters, which took place in November last year in Belgium and The Netherlands respectively.

The award-winning 26-year-old, ranked as the world’s number 10, is currently down under for her first-ever grand slam tournament, the wheelchair division of which started on 23 January.

Earlier today Montjane made her debut on court seven at Melbourne Park but was eliminated by her opponent, world number two Aniek van Koot of The Netherlands. The South African was unable to rattle Van Koot but she fought bravely in the second set, going down 1-6 and 5-7 in the end.

Despite her defeat, Montjane’s appearance in the singles tournament was hailed as an honour, as normally only the top eight in the world are invited.

She still has a chance of glory in the doubles when she takes on the top-seeded pair of Jiske Griffioen and Van Koot with her partner Daniela Di Toro from Australia. The match takes place on 24 January and is the last event on court five for the day.

According to Wheelchair Tennis South Africa, one of Montjane’s big goals for 2013 is to become the first African wheelchair tennis player to be ranked in the top four in the world.

Unbeaten by any other South African

What impresses is that she only started her tennis career at the age of 20. Since then, however, she’s remained unbeaten by any other South African player.

Her indomitable spirit was evident from childhood when, with an amputated foot and a congenital deformity of both hands and the other foot, she won awards for ballroom dancing.

She holds 29 singles titles and has participated in the 2012 and 2009 Paralympics as well as the 2009 and 2011 World Team Cup – the wheelchair equivalent of the Davis Cup and the Federations Cup.

But it’s not all sport for the champion – she also holds a BSc in recreation and leisure studies and at the moment is completing a diploma in retail business management at the University of Johannesburg.