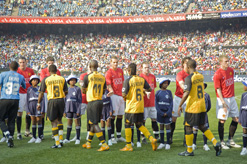 Barely three weeks after the end of the 2009 Confederations Cup, South Africa will host another feast of football, with Manchester City, the world’s richest football club, battling it out with Soweto glamour teams Kaizer Chiefs and Orlando Pirates in the 10th annual Vodacom Challenge.

Sponsored by mobile phone company Vodacom, the Challenge was first played in 1999, with African teams such as Ghana’s Hearts of Oak and Tunisia’s Espérance ST being invited play against the two local clubs. From 2006 the invitation went to English Premier League clubs, with Manchester United losing to Kaizer Chiefs that year, Tottenham Hotspur beating Orlando Pirates in 2007 and, in a 2008 rematch, United winning over Kaizer Chiefs in 2008.

“Our country has embraced the Vodacom Challenge as one epic event that showcases our stature as a football nation,” said Kaizer Motaung, chair of Kaizer Chiefs. For the players, he said, it has become a launch pad for international careers. He also appealed to South Africans to rally behind the local teams.

Orlando Pirates chair Irvin Khoza said the tournament has exceeded expectations. “This international friendly tournament was started with big dreams in mind, and reflecting on its history it has clearly achieved great success,” Khoza said.

Manchester City is expected to bring out its top players for the tournament, so fans can look forward to seeing their favourite international football stars in action – such as Brazilian super striker Robinho, who wears the No 10 jersey for City. The current squad also includes Zimbabwean international goal-getter Benjani Mwaruwari, who earlier in his career wore the colours of South African Premier Soccer League side Jomo Cosmos. Welsh international striker Craig Bellamy and famed goal-scorer Shaun Wright-Phillips, son of former England international and Arsenal forward Ian Wright, are also on the team.

In total, they have invested well over R1-billion in fresh talent during the course of this season, and it is likely that more investment is on the cards for the 2009/10 English Premier League campaign.

Besides action-packed football, the tournament is also supporting the Vodacom Foundation’s Goals for Miracles campaign, which raises funds for cataract operations for disadvantaged elderly people.

For every goal scored in regulation time by Manchester City, Orlando Pirates and Kaizer Chiefs, the Vodacom Foundation will contribute R150 000 (US$17 600) to Goals for Miracles – helping restore the sight of hundreds of senior citizens.

Three beneficiaries of Goals of Miracles provide the cataract operations: the South African National Council for the Blind, Netcare, and the Pretoria Eye Institute. During the Eye Care Awareness Week in October 2008 the Vodacom Foundation provided funding of R3.7-million ($435 000) for more than 1 700 cataract operations on elderly people. This brought the total number of cataract operations performed since 2004 to nearly 4 000.

Match tickets for the Vodacom Challenge will be on sale from 27 May at Computicket, Shoprite, Checkers and Checkers Hyper outlets. Ticket prices range from R45 ($5.30) to R150 (17.60) throughout all stadiums.