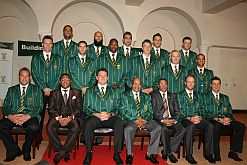 President Jacob Zuma and the Minister of
Sports and Recreation, Fikile Mbalula wish
the Proteas well as they set off to
compete in the Cricket World Cup
(Image: Bongani Nkosi)

“On behalf of the government and people of South Africa, we wish you all the success in this international campaign,” he said to the team.

All members were present when Zuma wished them well.

“We have assembled a fantastic team,” said Minister of Sports and Recreation Fikile Mbalula, who was also there to encourage the team. “We want to wish you well as you get ready to begin the battle. We are a winning nation and believe you will do well.”

Zuma said the sport was a national asset and he was happy to see an increased number of young people coming through the development structures of South African cricket.

“May this nation’s traditional winning streak see you through the ferocious spin bowlers of the Asian sub-continent, and also make you bring the trophy home.”

The president called on the team to use the country’s previous successes as their motivation for winning the World Cup. “We are certain you will win. You are part of a special nation. South Africans are special people – we can do things others can’t do.”

To show support for the squad, Zuma urged all South Africans to wear their Proteas shirts on Fridays as part of the Magnificent Fridays campaign launched by the Ministry of Sports and Recreation.

“We did this successfully for the Fifa Soccer World Cup, and we thank you for bringing back the excitement,” he said.

Mandela will be watching

Zuma delivered a message from former president Nelson Mandela, whom he visited before meeting the team. “When he talked about you his smile got broader and broader. He wants you to know he supports you all the way and said he will be watching you on the television.”

“We will support you to the final until you bring the trophy back and hand it over to Nelson Mandela,” the president said.

Captain Greame Smith said they were honored to receive a message from the former leader. “The message from Madiba will stand strong inside of us as we try to make our country proud. It is especially humbling to hear him pledge his support and praise for the squad.”

Smith said as a team they were encouraged by the knowledge that the country was behind them. “It will be the support from the fans back home that will carry us on,” he said.

He also thanked the president and the sports minister for their support. “It’s always an incredible honour to have the opportunity to meet with the president.”

Cricket South Africa CEO Gerald Majola also thanked the president and sports minister for their backing. “Thank you for getting the nation behind us. It means a lot to us to have the nation’s support as we go.”

Majola said this would help inspire the team to excel on the pitch. He then paid tribute to the players for being ambassadors for their country.

“Enjoy yourselves and bring the trophy home,” he added.

Before sending the team off with their final marching orders, Zuma sang for skipper Graeme Smith, who was celebrating his 30th birthday.

The player said he was “incredibly humbled” by the gesture.