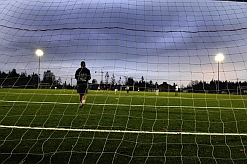 An artificial field may be used much
more extensively, resulting in greater
development of the sport.
(Image: University of British Columbia)

Because various manufacturers use
different structures for their turf, Fifa
instituted the Quality Concept for Football
Turf scheme to ensure a minimum
quality standard. (Image: Fifa)

A football field in the Congo, before
and after. (Image: Fifa)

South Africa’s National Lottery is adding its weight to the 2010 Fifa World Cup, announcing in April 2009 that it will invest some R81-million (US$9-million) in building 27 artificial football fields around the country. This will ensure the continuing development of the sport in South Africa long after the final whistle has blown.

The donation is the National Lottery Distribution Trust Fund‘s contribution to the 2010 Artificial Football Turf programme, which aims to ensure that the world’s biggest sporting event leaves an enduring legacy, and that communities also benefit from the World Cup.

The Distribution Trust Fund is driven by funds generated by the National Lottery. The body currently disburses around R2-billion ($224-million) every year to eligible non-profit organisations focusing mainly on charity, sport and recreation, and arts, culture and national heritage.

The 27 pitches, three in each of the country’s nine provinces, will be constructed over the next three years. Each will be given a one star grading under Fifa’s New Quality Concept for Artificial Turf, established by the world football body in March 2005.

The new facilities will also have a clubhouse and an office for use by the local football community.

Nine sites, one in each province, have already been earmarked by South Africa’s Local Organising Committee (LOC) for turf installation in 2009.

They are Orange Farm in Gauteng; Thohoyandou in Limpopo; Siyabuswa in Mpumalanga; Moses Kotane Municipality in the North West; Upington in the Northern Cape; Phuthaditjaba in the Free State; Grassy Park in the Western Cape; Cacadu in the Eastern Cape; and Ixopo in KwaZulu-Natal.

The new initiative falls in line with the South African Football Association‘s (Safa) grassroots development programme. By providing more facilities, the project enables Safa to further extend its reach into communities and expand its own programme.

Part of the agreement between Fifa and South Africa, as hosts of the 2010 World Cup, was that top priority be given to development of the sport, especially at community level.

Announcing the National Lottery’s initiative, LOC CEO Danny Jordaan commented that the lack of adequate facilities in rural areas and townships is one of the saddest legacies of sport under the apartheid regime.

“That is why when we bid to host the 2010 Fifa World Cup we did so on the basis that it leaves a lasting legacy for football in South Africa,” said Jordaan. “We need to strengthen grassroots development by providing quality football fields to accelerate the generation of world class players at the level of the regions of Safa.”

Jordaan added that he expected the 27 new fields to be the catalyst for the development of a new generation of stars of the Beautiful Game.

Fifa acknowledges the important role that artificial fields can play in the development of the sport, which is why it has provided a recognised international standard for football turf pitches in its Quality Concept for Football Turf scheme.

The testing scheme uses real turf as its benchmark and awards a one- or two-star “Fifa Recommended” rating to those pitches that meet its stringent quality criteria. Final approval for a surface can take up to six months.

A one-star turf is used mainly for recreational, community and municipal purposes, but it still has to successfully pass both laboratory and field tests to earn the stamp of approval from Fifa.

There are 165 pitches around the globe with the one-star mark, of which 15 are found on the African continent. However, the only installation in Southern Africa is at Somhloho Stadium in Lobamba, Swaziland.

The two-star pitch is used for games at professional level. In order to keep their prestigious grading these turfs must undergo annual field tests – if they are not tested they are automatically downgraded to a one-star installation. The latter retain their grading for three years at a time.

There are 73 two-star pitches around the world, of which six are in Africa. There are five in Morocco and one in South Africa at the Thulamahashe Stadium in Thulamahashe, Limpopo province. The Thulamahashe field is due for re-testing in September 2009.

Certification is given only to installed pitches and not to the turf carpet alone, because the underlying base structure is just as important to the playability of the pitch as the surface turf itself.

Fifa president Sepp Blatter said that artificial turf can be used in more extreme climates, allowing footballers around the world to play as often as they like and under the best conditions. Blatter added that such a pitch can be used almost 24 hours a day and seven days a week because it does not need time to recover.

According to Fifa, under average African conditions between three and five games a week may be played, but on a Fifa Recommended artificial surface this jumps to around two matches a day, excluding training sessions.

Although artificial turf still needs to be maintained to ensure the longest possible life span, this can be achieved at a much lower cost and in less time than a real turf field would require. Conservation of water, a precious resource in large parts of Africa, is a critical feature of an artificial turf.