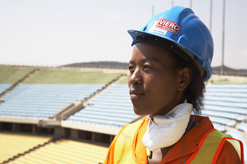 A worker at the Royal Bafokeng Stadium
in North West province. The stadium,
which is currently undergoing major
renovations, is one of 10 that will be used
to host both the 2009 Confederations Cup
and the 2010 Fifa World Cup.
(Image: Hannelie Coetzee,
MediaClubSouthAfrica.com. For more
photos, visit the image library.)

Recruitment and training of about 5 000 volunteers needed for organisational activities during the 2009 Fifa Confederations Cup will begin on 1 July this year.

The success of major events such as World Cups and the Olympic Games relies heavily on volunteers as a high level of organisation is needed in many facets in and around stadiums as well as other areas where visitors will converge like spectator parks. While 5 000 volunteers will be needed for the 2009 Fifa Confederations Cup about 15 000 will be required for the 2010 Fifa World Cup.

The 2009 Fifa Confederations Cup, which is largely seen as a dress rehearsal for the 2010 football event, will take place between 14 and 28 June 2009. The trophy is contested by 8 nations namely South Africa as the host nation, Italy as the current world champion, USA as CONCACAF champion, CONMEBOL winners Brazil, Iraq as AFC champion, CAF champions Egypt, winner of the 2008 UEFA championship and winner of the OFC nations competition.

Games will be held at 10 venues in nine cities across the country in Cape Town, Durban, Johannesburg, Bloemfontein, Nelspruit, Polokwane, Rustenburg, Pretoria and Port Elizabeth. Although there were doubts about Port Elizabeth’s ability to have the stadium ready in time for the Confederations Cup, these have been laid to rest following steps and assurances by the municipality that the stadium will be prepared to be included in the tournament.

According to a Fifa volunteer handbook, volunteers will go through different training programmes to understand their responsibilities, the venue operation and general information about the FIFA Confederations Cup South Africa 2009. Volunteers will be trained in customer services, taught how to deal with spectators and also to understand the behaviour of fans from different places around the world.

Volunteers will be sourced from the football fraternity, tertiary institutions, existing volunteer organisations, and the private and public sector. South African citizens who will be 18 or older on or before March 1 2009 can apply and various age groups from youth to retired citizens will be considered.

“The most important thing we’re looking for in volunteers are people who are committed to helping us successfully host the World Cup,” said Onke Mjo, the Volunteer Programme Manager of the 2010 FIFA World Cup Organising Committee South Africa. “The World Cup will call on us to step beyond our boundaries and experiences and cater to the whole world. Volunteers will be crucial to that process. We’re looking for open-minded, proactive South Africans who will always be willing to assist an individual who needs help with anything.”

To ensure that all South Africans get the opportunity to become a volunteer for the Fifa events, 2009 Confederations Cup volunteers will have to reapply for inclusion in the 2010 event’s volunteer programme.

“When South Africa was awarded the World Cup on 15 May 2004 it was a victory for South Africa and the entire continent,” said Mjo. “All South African say they are looking forward to it and want to participate in it. The volunteer programme is the platform giving thousands of South Africans the opportunity to do just that.”

Application forms can be downloaded from the 2009 Fifa Confederations Cup website between 1 July and 28 August. Emails can also be sent to volunteerprogramme@2010oc.com.