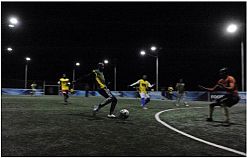 Young boys from Mathare township in
Kenya’s capital city of Nairobi are
enjoying four extra hours of football at
the Mathare Stadium, after solar-powered
lights were installed.
(Image: GADGETOZ)

Young boys from Mathare township in Kenya’s capital city of Nairobi are enjoying the benefits of the country’s first solar-powered floodlit stadium where they can play football after dark.

The new lighting is part of the legacy of the first African Fifa World Cup, held in South Africa in 2010. Through its corporate social responsibility strategy, Fifa and Berlin-based humanitarian organisation streetfootballworld launched the Football for Hope project, which promotes education, health, empowerment, peace, positive change, and children’s rights through football.

As part of the project, Fifa chose 20 locations in Africa for Football for Hope Centres.

One of the locations was the Mathare Youth Sports Association (MYSA), where the new solar lighting system has been installed.

The system, which was donated by China’s Yingli Green Energy Holding Company, is giving children from this township more time to play the Beautiful Game – long after the African sun has set.

Due to the powerful glare from the sun, players struggled to see the ball when playing during the day. Many preferred to practice at dusk in the streets, but because of the high crime levels, this was not a safe option. Having the stadium lit up at night now means that the youngsters have four extra hours each day to play the sport they love – and they can do it in a protected environment.

“Since the lights were installed we have been seeing the changes,” said Stephen Muchoki, who manages the centre. “There are more teams coming to the centre who want to use the pitch for training in the evenings.”

Muchoki said the centre was a great addition to the township, as sport has proven to be a great tool for transforming the lives of young Kenyans from this tough neighbourhood, known for its high levels of unemployment, crime, illiteracy, HIV/Aids and poor sanitation.

The MYSA was founded in 1987 and has been instrumental in the development of football programmes to help groom young talent for the past 24 years. Football for Hope is another initiative helping to sustain the MYSA’s ongoing activities.

“The centre has really become a place of hope for many youngsters,” said Peter Wanyaga, a resident of Mathare. “It’s not just about running around or kicking the ball – they also learn valuable life skills and have a renewed sense of hope about their future.”

Wanyaga said the streets of Mathare are dangerous for the children to play in, so many end up with little to do after school or during the school holidays. “They can’t play freely in the streets especially after dark, so many end up being bored and we fear they might get up to illicit activity. Having the centre and the stadium lit at night has really brought radiance to these kids’ lives.

“They are happier, and many more are joining teams and getting involved in sport. Instead of being locked in fights or experimenting with the wrong things, they are rushing to the stadium in the afternoons to experiment with football and learn skills that will help them fight for a brighter tomorrow.”