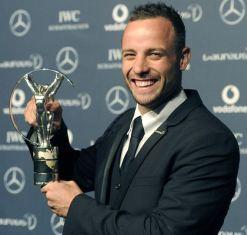 South African Paralympic sprint runner
Oscar Pistorius is the winner of the 2012
Laureus World Sportsperson of the Year
with a Disability award.
(Image: sportlive.co.za) 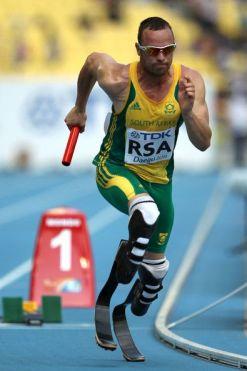 Oscar Pistorius runs with the aid of
Cheetah Flex-Foot carbon fibre transtibial
artificial limbs, which is why he has
come to be known as South Africa’s
blade runner.
(Image: zimbio.com)

South African Paralympic sprint runner Oscar Pistorius is the winner of the 2012 Laureus World Sportsperson of the Year with a Disability award.

The Laureus World Sports Awards, regarded as the Oscars of the sporting industry, are awarded annually to sportspeople with outstanding achievements.

Pistorius was presented with the prestigious accolade after becoming the first amputee to win a track medal, a silver in the 4 x 400 metres relay team, in the 2011 non-disabled World Championships in Daegu, South Korea.

After receiving the honour at the awards ceremony in London, he thanked his supporters for the nomination.

“This is just a great privilege to be nominated; it is really humbling to be here,” he said.

His athletic ability has earned him the international reputation as the “fastest man on no legs”. He runs with the aid of Cheetah Flex-Foot carbon fibre transtibial artificial limbs, which is why Pistorius has come to be known as South Africa’s blade runner.

His participation and outstanding performance in the non-disabled World Championships has helped to further his goal to bridge the gap between disabled and non-disabled sport.

But he is not one to rest on his achievements. Next he plans to compete in the 2012 Olympic Games.

Laureus chairman Edwin Moses said in a statement that he holds Pistorius in high regard. “Oscar is a remarkable human being – one of the most impressive people I have ever met,” Moses said.

Laureus is the Latin word for laurel, the universal symbol for victory in sport. The award is a fitting honour for the top athlete, who was born without a fibula in either leg.

On the recommendation of leading medical specialists, his parents decided to have his legs amputated below the knee, as this would give him the best chance at learning to walk later in life.

Six months after the operation, Pistorius received his first pair of prosthetic legs and within days he learnt to walk with them.

Years later, he went on to become a world champion sprint runner and the first Paralympian to win gold in the 100m, 200m and 400m sprints in Beijing in 2008.

Laureus Academy member and chairman of the London Olympic Games, Sebastian Coe told South African sport broadcaster supersport that Pistorius has made a major contribution to Olympic and Paralympic sport.

“I think what Oscar has done is to really make us challenge our own orthodoxies, our own views about disability,” Coe said.

Winners of the Laureus Awards are selected on the basis of a two-part voting process. A selection panel of the world’s leading sports editors, writers and broadcasters from almost 100 countries cast their votes to create a shortlist of six nominations in each category.

The voting process is monitored by independent auditors and members of the Laureus World Sports Academy, who select the award winners by secret ballot.

Each winner receives a Laureus statuette, produced by French jeweller and watchmaker Cartier. The statuettes are 30cm high and weigh 2.5kg. Each figure contains 670g of solid silver with a 650g gold finish base.

The Laureus World Sports Awards is not only about honouring the world’s best sportspeople.

The high profile awards are a platform to showcase and generate support for the social programmes of Laureus’s Sport for Good Foundation, and the work of the Academy.

Proceeds from the Laureus World Sports Awards directly benefit the Sport for Good Foundation, which supports 91 community sports projects in 34 countries around the world.

Since its inception, Laureus has raised US$52-million (R397-million) for projects which have improved the lives of more than one-and-a-half million young people.

As a recipient of the award, Pistorius also becomes a Laureus ambassador.

“He has shown his determination to support the cause of sport for good. I congratulate him on this well-deserved award,” Moses said.

The Laureus Sportswoman of the Year award went to Kenya’s distance runner Vivian Cheruiyot, who won both the 5 000 and 10 000 metres gold medals at the World Championships in Daegu.

In 2001 Johannesburg-born adventurer and explorer Mike Horn, now a sought-after motivational speaker, won the Action Sportperson of the Year Award for his sailing accomplishments.

The Springboks, South Africa’s national rugby team, took the World Team of the Year Award in 2008, a year after becoming world champions for the second time.

In 2010, South African swimmer Natalie du Toit was the winner of the Laureus World Sportsperson of the Year with a Disability Award.

Du Toit has become one of the most successful disabled athletes of all time, and an inspiration to many.