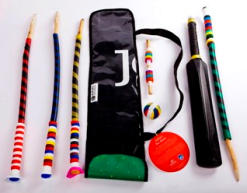 The colourful Kriki for Shore sets are ingeniously constructed from a variety of everyday waste items. 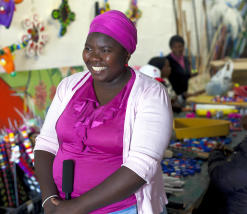 With the new Kriki for Shore initiative, cricket-mad and green-minded South Africans can now play their game with the added knowledge that they are helping to clean up our beaches and create jobs in communities.

Kriki for Shore produces colourful cricket sets using plastic waste gathered from beaches. Each set consists of a bat, ball, wickets and bails, and an extra wicket for the bowler’s end. It comes in a bag for easy carrying.

It’s the successor to the well-received Touch rugby ball project, which provided work for unemployed seamstresses around the period of the 2011 Rugby World Cup. The women made rugby balls by hand, using recycled billboards for the outer casing and plastic bags for the stuffing. All material was gathered on the streets of their communities. This gave them an income of up to R200 (US$23) a day, and addressed the waste of both talent and material.

“Kriki was designed to address the same issue,” says Thurlow Hanson-Moore, founding partner at social communication company Mbongiworks, a division of creative consultancy Thewinwingroup, “creating useful items out of waste and cleaning up at the same time.”

Like Touch, Kriki is part of the CSI efforts of Gauteng-based waste management company EnviroServ, through its Play Clean campaign, which aims to put the fun into recycling and reclaiming.

“We would like to take the initiative into a new sport every year,” says Hanson-Moore, mentioning football and netball as potential future projects, “so that whatever sport you prefer, when you use your recycled sport set you become an advocate for everything that Kriki stands for.”

Interested in a Kriki set? Order yours through the initiative’s Facebook page or Twitter @kriki4shore. You can also email producer1@mbongiworks.co.za or call +27 76 656 8370. Kriki for Shore sets sell for R185 ($21) each, and there are hopes that they will be available in retail stores soon.

Each Kriki for Shore set is made from waste collected by seaside communities in the Western Cape.

The waste collection is overseen by the Kommetjie Environmental Action Group (Keag) and is reworked by non-profit Harlequin Foundation into functional items. Harlequin administers the eMzantsi Mapiko project, a community-building entrepreneurship initiative that includes an annual carnival in the suburbs of the peninsula proper.

Mapiko recently received a grant from Unesco’s International Fund for Cultural Diversity to the tune of around R719 000 ($81 000), to enable it to expand its reach. Trained workers in recycled art have gone on to work at the Gauteng and Cape Town carnivals.

Earlier in the year the workshop was burgled, resulting in the loss of equipment and tools worth thousands of rands. But in October Mapiko was approached by representatives from Keag, asking them to produce the Kriki sets – this helped ease the pain as each Kriki set provides work for two days for an individual.

Currently 14 women who are their families’ sole bread winners, as well as six disabled crafters, have benefited from Kriki for Shore, but as more people support the initiative by placing their orders, more community members will receive training.

“We are keeping up with all orders,” says Hanson-Moore, “and so far over 400 sets have been made.”

The wickets are made from a total of 64 bottle tops joined together, with pipe lengths and wood from the Port Jackson acacia – an exotic species – adding stability, while the bails are constructed from eight bottle top lids with a length of wood down the middle. Bats are creatively made from fabric softener bottles and Port Jackson wood. 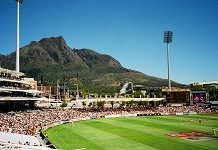