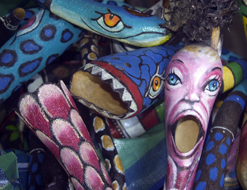 Kelp vuvuzelas come in all shapes, sizes
and colours. 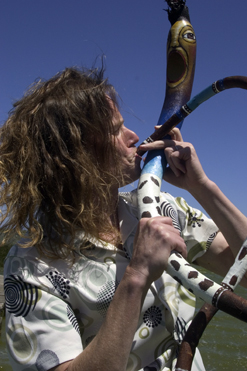 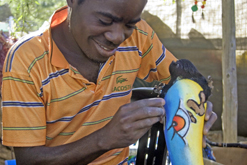 When the fans go marching in to the stadiums during the 2010 Fifa World Cup, most of them will be carrying South African vuvuzela trumpets. Some will be the ubiquitous and rather ordinary plastic ones, some will be traditional tin ones, and some will be home-made.  But others will be beautiful works of art – the kelp vuvuzelas that are Cape Town’s contribution to football culture.

Vuvuzelas go back a long way. In almost every country in the world, people have come up with some form of breath-operated musical instrument – a conch shell, a didgeridoo or a penny whistle.

In southern Africa, the spectacular spiral kudu horn became the instrument of choice for ritual occasions, dancing and generally making music. That developed into a long tin horn that has been used at religious ceremonies for ages. Today worshippers from the charismatic Shembe Church use traditional tin vuvuzelas to make a joyful noise unto the Lord at their days-long festivals.

With a sound like the trumpeting of a bad-tempered elephant, vuvuzelas are excellent noise-makers, so they eventually found there way into football stadiums and mainstream South African culture.

Although their strongest association is with football, they’re used at many other sporting events. Donia Kamstra, winner of a silver medal for the women’s doubles at the 2005 World Marathon Canoeing Championships in Perth, Australia, says that the sound of vuvuzelas blown by South African supporters inspired her to greater effort.

“As we came under the bridge on every lap, we heard those vuvus, and we just knew they were cheering us on.”

But having entered the mainstream, vuvuzelas have become mass produced, punched out in some factory by their millions – identical plastic horns. Cheap and cheerful they are, but they are not things of beauty.

But not kelp vuvus. These are things of beauty, and eco-friendly, too. Probably the most notable kelp vuvuzela is that blown by the whale crier in Hermanus, a public servant walks around the town blowing his vuvuzela to inform locals and tourists alike where the whales are to be found. The previous incumbent even travelled to the UK to take part in a town criers’ competition – with his kelp vuvu, of course.

Now, thanks to Adam Carnegie and his organisation, kelp vuvuzelas are also becoming mainstream.

It all started when Carnegie was tasked to find a project for his son’s class to make some kind of craft for sale at their school fundraising fete. He hit upon kelp vuvuzelas, which offered more than just a craft project as the whole class could get together to collect kelp on the beaches, and then do the painting. It was as much a social project as a creative one.

They made 22 vuvuzelas, which were sold out in the first half hour of the fete. It was clearly a good business opportunity, so Carnegie founded the Kelp Environmental Learning Project, or, simply, Kelp.

Carnegie, a graphic designer and illustrator, started painting vuvus in his garage, employing others to help him. The beauty of kelp vuvuzelas is that each is unique. Lying on the beach, the kelp dries out in the sun to form interesting shapes – some straight and long, some curved, and some twisted into almost a pretzel shape.

“Kelp is amazing stuff,” says Carnegie. “It dynamically grows from the dark depth to the light at the surface.

“The kelp plants support one another – working together – braving the elements and the huge waves of the mighty sea. The kelp forest provides shelter for a thriving community.”

The mission of Kelp is simple. “We want to create jobs, make a noise, make people laugh, remind people to be in the moment.”

The project’s first big break was when the City of Cape Town’s Youth Environment School ordered 250 vuvus to give to the young people on their courses. They asked for a range of designs, including 50 special animals to fit in with the environmental theme.

Carnegie designed chameleons, fish, frogs and snakes, and also some flowers. But his first love is his kelp warriors – weird and wacky vuvuzelas depicting people, some of which are serious, even fierce, while others are very funny.

Carnegie also did a range of sea creatures for the opening of the Save Our Seas Foundation offices in Kalk Bay, and the Two Oceans Aquarium gave out arum lily frog and western leopard toad vuvuzelas at the launch of the Beyond the Pond temporary exhibition on frogs.

It didn’t take long, though, before Carnegie realised that the project was becoming more work than he could handle.

“A combination of selling and running the project was just too much,” he says. “So I restructured it as a social upliftment programme.”

The project has moved from his home to small premises at the Kommetjie Environmental Action Group, based at Imhoff’s Farm in Kommetjie. Carnegie’s artist brother Mike is a part-time operations manager, popping in a couple of times a day to keep the project running smoothly.

Kelp pays people to collect the dried plants from the beaches, with some positive spin-offs. The collectors also pick up litter, some of which can be recycled. They operate mostly on Long Beach, an aptly named stretch of sand known for muggings in its more isolated spots. The kelp collectors also act as a presence on the beach, making it a less lonely place and discouraging criminals and poachers.

So it’s more than just creating a job for the collectors – it’s also a subtle environmental education and community service. The intention is to grow the projects to include a number of kelp pleks (“plek” is Afrikaans for place) all along the Western Cape coast.

Kelp currently employs four full-time painters, who start their jobs by painting the cheaper and much simpler football vuvus, or only painting the stalk, while Carnegie or one of the more experienced painters will paint the more complex head.

Once they are more experienced, they move on to painting whole vuvus.

After the kelp is painted, the vuvuzela is sealed inside and out to protect it from moisture – but it will never be a robust thing. If you get your kelp vuvu wet, you’ll be left with a limp, soggy and rather smelly damp squib.

Kelp is also involved in a youth mentoring programme called Boys 2 Men. Here collecting trips on the beach are used for community building, fun and environmental education, and the young men on the programme sell the kelp they collect to the project. They also get to try their hand at painting.

Kelp helps the community, but Carnegie emphasises that it is primarily a business venture, intended to make a profit.

“We’ve had our eye on the 2010 World Cup from the beginning,” he says. “We’ve got a range of team vuvus – black and white for Pirates [football club], black and yellow for Chiefs and red and white for Ajax. And we do one in the colours of the South African flag.

“And, closer to the time, we’ll start doing them in all the international team colours.”