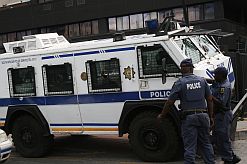 SAPS officers will be on alert during the
2010 Fifa World Cup. 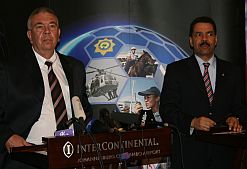 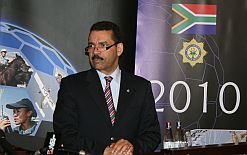 Interpol, the global police organisation, has given its assurance that the strictest security measures are in place for the 2010 Fifa World Cup in .

While not revealing the total number of police officers Interpol will use during the event, Noble said about 25 member countries will provide with additional security personnel. Each of the 32 participating countries will also send in their own security officers.

Government will spend R640-million (US$88-million) on deploying 41 000 SAPS officers across the country during the tournament, including 31 000 permanent officers and 10 000 police reservists. As a further measure, special courts will be set up to deal with cases involving foreign visitors – and these will be open 24 hours a days.

“Our security plan is very thorough [and] very comprehensive,” said Noble. “Interpol members will be integrated with the SAPS.”

This will be Interpol’s biggest operation in the history of international events, Noble added.

SAPS and Interpol officers will head joint operations at venues such as stadiums, hotels, public viewing areas and others related to the World Cup. “We will jointly plan specific operations,” said Deputy Police Commissioner Andre Pruis.

The location of Interpol’s security command control centre is still under discussion, but the structure will be the nerve centre of operations and the SAPS will have direct access to it, Pruis said.

“[Interpol] members should be at the heart of operations. They should be part and parcel of [intelligence] decisions made.”

Ports of entry to will be the “focal points” of police efforts, said Noble. Police presence and intelligence operations will be beefed up along border posts, coastline ports and airports.

The main focus will be exposing people entering the country with stolen passports. Visitors will also be screened to detect potential threats of terrorism and hooliganism. Interpol has a list of names of problematic individuals in a database, and South African police will have access to it during the tournament.

Identity documents, funded by Interpol, will be issued to each visitor after he or she is screened.

“Our database has not identified any [terrorist] threat linked to the World Cup,” said Noble.

Interpol’s cooperation in providing South African police with exclusive information about dangerous individuals was commended by Pruis. “We’re very happy that Interpol will play this major role in giving us access to the rest of the world,” he said.

“The risk assessment is based on intelligence from all over the world.”

SAPS and Interpol are currently finalising the process of profiling participating countries and the nationalities of each match ticket applicant. The country profiles will uncover threats that players and their entourage might be exposed to, among other things.

Intelligence from ’s neighbouring countries and states within the Southern African Development Community will also be critical to operations. “We will cooperate very closely …” Pruis said.

“It’s not just a South African event. If you look at security, it’s a regional event, it’s an African but also an international event,” he added.

The SAPS will set up special projects to deal with organised crime in the run-up to and during the World Cup. The focus of these will be on human and drug trafficking, which are both predicted to escalate.

Pruis is also confident that hooliganism in stadiums and other viewing areas will be combated with ease. “I’ve been in and I’ve seen hooliganism during the World Cup. I think we can deal with it,” he said.