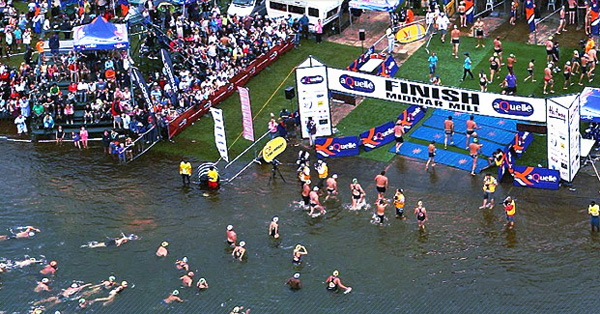 Backstroke, breast stroke or even doggy paddle – it’s all welcome at the Midmar Mile, the annual gathering acknowledged by Guinness World Records as the largest open water swim on the planet. It’s a happy, vibrant community event, with champions swimming alongside newbies, and everyone out to have fun. (Image: www.midmarmile.co.za )

The sun shone brightly, the atmosphere was charged, and just metres away from the lapping water, throngs of swimmers and supporters milled about, doing exercises, eating hot dogs, adjusting their swimming caps, slathering on sun screen, and all waiting in anticipation for their race to begin.

It was time for the Midmar Mile, sponsored by aQuelle water, the world’s biggest open water swim. A momentous charity fund-raiser, it took place on 8 and 9 February this year. It is held annually in February at the Midmar Dam, north of Pietermaritzburg, in KwaZulu-Natal, and attracts thousands of individuals, from serious international athletes and Olympic medallists to recreational swimmers and disabled swimmers.

In 2009, the event, in which 13 755 competitors finished the race, was recognised by the Guinness Book of World Records as the world’s largest open water swimming event. Its operations are among the most professional in the sport and its budget is the largest in the world.

The distance swum is roughly one mile – Wayne Riddin, coach, administrator and the race director, says a unique feature of the swim is that while the distance covered is always a mile, depending on rainfall and the water levels in the dam, the distance swum varies from year to year. “In years with poor rainfall, competitors are subject to the infamous Midmar sprint start: a bedlam of bodies sprinting across the muddy lake-shore and through the shallows until the water is deep enough to swim.”

Ridden, who has led the operations to a level unprecedented in the open water swimming world, was nominated for the 2012 and 2013 World Open Water Swimming Man of the Year award. “It’s extraordinary to see champion swimmers laden with medals swimming alongside novices. The atmosphere is so exciting and alive. Swimming is on such a high here, with much inspiration from Chad le Clos and Cameron van der Bergh.”

Sadly, despite the many safety measures – on hand are 120 professional lifesavers, the South African police diving unit and the navy – a swimmer went missing this year and is presumed to have drowned. Johannesburg businessman Herman van Straten never returned from the water after taking part in Race 3 on Saturday. The search for Van Straten was continuing on Monday. In 2011, Nico Mellet, 45, drowned while swimming the Mile.

Riddin says the race was first held in 1974, with 193 competitors. “Over the next 10 years this grew to over 1 500 people and it was proposed that the entries stopped at 2 500. I got involved 22 years ago as an organiser and there are now over 18 000 swimmers. The numbers are growing and international people traverse continents to participate.”

The more social swim is for families on the Saturday, and the highlight is the competitive events on the Sunday. There is a swim for everyone: a family event, a company event, a non-company event, which promotes the development of swimmers, among others.

On race day, to handle the vast number of competitors, five groups of swimmers, divided by cap colour, are set off in batches of people, 600 in each, three minutes apart. The cap colours determine whether the competitor is a novice swimmer, a champion or is bobbing in-between. The group division the swimmer is assigned to is based on a qualifying time in a previous qualifying event, with the fastest group leaving first. The range of age groups varies from five-year-olds to the more mature octogenarians. In all, there are eight events split over two days.

Mother Nature was in a playful mood this weekend, and decided to turn the tranquil dam into a sea of swells. As a result, the under-13s were unable to participate, and others would have preferred lilos urging them on instead of mouthfuls of water and a course that constantly veered off line.

Each event included champions and a phenomenal tenacity to succeed. Mentally impaired Craig Groenewald continued his remarkable Midmar Mile run, claiming his 15th consecutive victory in the disabled category. “The vibe and all the people is amazing. I enjoy open water swimming and I am getting into it more and more,” he said.

At 81 years old, Mike Arbuthnot, founder of the event, is a Midmar Mile legend. He completed his 81st crossing and continued his run as the only man to have competed successfully in every Midmar Mile since its inception. Arbuthnot also congratulated the oldest female finisher, Lorna Cochran, who successfully completed her crossing at 90 years old.

Chad Ho and Ashley Twichell were again the overall Midmar champions. Ho, 23, is a veteran of open water swimming, with various victories over the years in marathon swimming, including four consecutive wins before this year’s Mile.

Entries for the seeding races this year had grown by about 15% and Ho said he was excited to see the direction in which the sport was moving in South Africa. “Definitely, I’m excited. I want to see the sport grow. I want to see development come through or local talent or youngsters coming up. So it’s exciting to see the potential emerging. Hopefully one day we’ll see someone else in my shoes, trying to go for five wins in a row, six in a row.”

Twichell won a thrilling women’s race to take the title for the second consecutive year. The American finished in a time of 19:45, two seconds ahead of seven-time winner Keri-Anne Payne, the 2012 Olympic Games open water silver-medallist from Great Britain.

Charity is a major element of the Midmar Mile which this year raised funds for the breast cancer community carer, PinkDrive. Its name was displayed on swimmers bodies. Bright pink costumes for women and swim shorts for men were the order of the day for people swimming in support of the public benefit organisation.

PinkDrive is South Africa’s first mobile mammography and educational unit. To date, it has provided over 5 000 free mammograms, done over 54 000 clinical breast examinations, educated over 79 000 people about breast cancer, and distributed over 90 000 educational materials.

Described as the most extravagant, innovative, comprehensive open water swimming event in the world, the Midmar Mile has it all. It’s a phenomenal magical space with thousands gathering in one beautiful location.

Wendy Schulze, who has competed nine times, summed up the feeling: “So many people coming together, swimming together, the young and the old swimming side by side, children swimming with their parents for charities, this heightens the emotion. Days like this offer the perfect opportunity for reflection and immense fun, among a huge family of swimmers. It doesn’t matter if you are swimming back stroke, crawl or the Macarena to the end, there is always encouragement and a sense of achieving something extraordinary.”