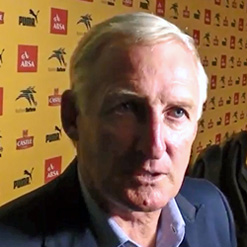 “After beating Spain, we should carry on with the habit of winning,” Bafana Bafana coach Gordon Igesund said.
(Image: South African Football Association)

South African national football coach Gordon Igesund has declared himself happy with his players after two gruelling training sessions in Cape Town over the weekend. Bafana Bafana are preparing for the Orange African Nations Championship 2014, or Chan 2014, which the country will host from 11 January to 1 February.

The competition features national teams made up of players who ply their trade in their home countries only.

The habit of winning

“After beating Spain, we should carry on with the habit of winning and [the African Nations Championship] is a type of tournament where it is important for the team to do well,” Igesund told Daniel Mothowagae of City Press.

“The challenge is to get Bafana going to a point that we get into the top eight in Africa, so that we can be seeded when the draw for big tournaments is made.”

Igesund is a little behind in his preparations for the event after a mini training camp, from 27 to 30 December, had to be called off due to the reluctance of clubs to release their players, but that has now been resolved, even though the competition falls outside of Fifa’s competition window.

Mamelodi Sundowns midfielder Hlompho Kekana, speaking at the training camp, said he was looking forward to the event, and expressed his confidence in Bafana Bafana. “It is always a great feeling to represent your country and I am happy to be here,” he said. “If you look at the players, you can see they want do to well for South Africa.

“It is a big tournament for us local-based players and we want to show everyone what we are capable of doing. We intend to do well, very well and we are really looking forward to the start of the tournament.

“There is a lot of confidence in the team and the mood is high. As hosts we are expected to go all the way and that is our focus.”

With the South African national team now in camp, six of the 16 teams have now arrived for Chan 2014. The team from the Democratic Republic of Congo, who won the first tournament in 2009, are already in the country, as are Gabon, Libya, Mali and Mauritania.

Bafana Bafana are in Group A with Mali, Mozambique and Nigeria. They kick off the tournament on 11 January at 18:00 when they face Mozambique at Cape Town Stadium.

Tunisia is the defending champion. They defeated Angola 3-0 in the final of the 2011 African Nations Championship in Sudan.