Journalists will be able to produce
programmes about the 2010 Fifa World
Cup from the IBC. 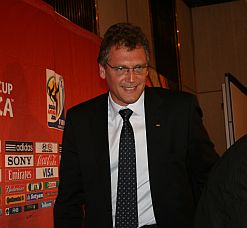 The International Broadcast Centre (IBC) in Johannesburg, equipped with top-of-the-range technology, is fully prepared for the thousands of reporters who will converge there to cover the 2010 Fifa World Cup.

Journalists were introduced to the facility on 21 May, ahead of its official opening on 2 June by Fifa president Sepp Blatter.

The impressive IBC is based at Soccer City, where the opening and closing World Cup matches will be played. It will be the nerve centre of live broadcasts from there and the other nine host stadiums around the country.

Some 1 900km of cabling has already been laid to connect the 10 facilities and enable all 64 matches to be broadcast live, in high definition, to 204 countries. It’s estimated that this coverage will reach billions of people around the globe.

“It’s very clear that it’s from here [the IBC] that the world will be able to watch the World Cup from South Africa,” said Fifa general secretary Jérôme Valcke.

About 13 000 international journalists and other media personnel have been accredited to use the IBC and some organisations have already set up their studios. A total of 189 media groups have confirmed that they will broadcast from the 30 000m2 centre.

The top-rated Host Broadcast Services (HBS) will facilitate live feeds of every match to the licensed television and radio stations. It will use about 32 cameras per match for the live transmissions, an improvement from the 26 cameras used per match during the 2006 Fifa World Cup.

“[The World Cup] will be broadcast in more homes than ever before. There will be a lot of television companies in South Africa,” said Fifa TV’s Niclas Ericsson.

For the first time in the history of broadcasting the tournament, HBS will use 3D cameras to shoot some of the matches. Fifa said 25 of the 64 matches will produced in 3D.

The IBC also boasts 80 interview and presentation studios, and facilities for mobile network operators to produce live broadcasts for mobile phones. South Africa’s MTN announced in 2009 that it will use this service.

“We trust that we’ll make broadcast history with Fifa in this World Cup,” said HBS CEO Francis Tellier. “It [mobile phone broadcasts] is one of the innovations that we’ve brought to this World Cup.”

Reporters and fans need not be worried about blackouts at the IBC, as organisers have enlisted the services of Aggreko, a reputable international electricity company, to ensure power supply at all times.

About 16 diesel-powered generators, each with a capacity of 1MW, will be used to back up Eskom’s national electricity grid.

“In every major sporting event there’s a risk for power failure … We’re here to stop that from happening,” said Aggreko’s CEO Rupert Soames.

Aggreko believes that their power plan is “as robust as we can technically make it”. The company, which has provided back-up power for major events such as the Olympics and Barack Obama’s US presidential inauguration, will set up 1.5MW-capacity generators at each stadium for broadcasting operations.

Aggreko has partnered with Shanduka Group, a leading South African investment company, for the World Cup project. “We’re sure that everything will work smoothly,” said Shanduka’s chairperson Cyril Ramaphosa.

Print media journalists will be catered for in centres called “Media Tribunes” at each host stadium. Telkom has equipped the centres with telephones, fax machines, printers and data ports to make the reporting process as convenient and efficient as possible.

Photojournalists will be able to download and send off their images at any time, thanks to Telkom’s advanced equipment.