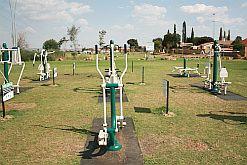 The outdoor gym at Petrus Molefe
Park – which is a partnership between
Green Outdoor Gyms and Joburg City
Parks – cost R260 000 (US$35 000). 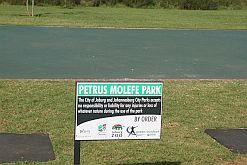 The gym has 10 sets of equipment
which can accommodate 20 people
at a time, and an aerobics section.
(Images: Ray Maota)

The war against the bulge is on for residents of Dlamini and surrounding areas in Soweto as they now have an outdoor gym which they don’t have to pay a premium to use.

The Petrus Molefe Eco-Park in Dlamini is a 700m2 space that showcases the work of Joburg City Parks, whose extreme makeovers convert disused pieces of land into fully fledged green recreational facilities, usually in a matter of hours.

Oscar Oliphant, a senior manager at City Parks, explains: “South Africa has the second most obese people in the world and the problem will only get bigger if ignored.”

The extreme park is the sixth to be built by City Parks under the Greening Joburg initiative. The others are in Diepkloof, Protea Glen, Claremont, Wilgeheuwel and Pimville.

No expense for your health

Tim Hogins, from Green Outdoor Gyms, says: “The gym has 10 sets of equipment which can accommodate 20 people at a time and the equipment cannot be stolen because it is mounted to the ground in concrete. And it is weather-proof.”

The outdoor environment-friendly gym is a first of its kind in South Africa and will give all Sowetans a chance to shape up at their convenience.

Khehla Nkosi, who doubles as security and fitness instructor at the gym, says: “In the morning around 6am you can find about 40 people training, midday about 15, and in the afternoon about 30.”

Nkosi adds that even the old ladies from the neighbourhood have taken to the gym and turn up for almost 20 minutes a day of supervised training.

Simon Moyaba, from Chiawelo, about five minutes’ drive from Dlamini, says: “I used to train at the gym at Grace Bible Church which is further from my house than here and we had to pay to use it. Now I just come here and park my car and train.”

He adds that although it does get full, there is a courtesy among users and there have never been quarrels for the machine.

The gym also has an aerobics section.

Significance of the park

Molefe was believed to be the first Umkhonto we Sizwe (MK) soldier to die in the liberation struggle against apartheid in South Africa. The MK was the military wing of the African National Congress, the ruling party in South Africa today.

On a mission to bomb the Bantu Administration offices in Dube, in Soweto, the device exploded prematurely, killing Molefe and severely injuring his MK cell member, Benjamin Ramotse.

This incident happened on 16 December 1961, the night the MK was officially established.

Ramotse was later smuggled out of the country to conduct ANC activities in exile, but was captured and sent to Robben Island for 15 years. He was released in 1985 and died a year later.

The MK carried out 22 bombings of civilian, military, industrial and infrastructural sites during the liberation struggle.

Former Rivonia Trial accused and neighbour, Andrew Mlangeni, said at the opening of the park: “Molefe had worked as a truck driver. He was a trade union organiser and served on the executive of the Dube Advisory Board.

“He was one of the very few comrades to own a car at that time and always volunteered his Zephyr Zodiac for organisational work.”

Most MK soldiers were not trained and had to make their own bombs, which was dangerous. “This was a risky process and these homemade bombs were not always very reliable,” said Mlangeni.

Remembering the events of the day, Johanna Ramotse, said: “I was at home when I heard a loud explosion. I never imagined the blast had anything to do with my husband.

“When we arrived at the scene near the Bantu Administration offices, I saw a body covered, and on inspection, found that it was Molefe. My husband had already been rushed to hospital.”

Molly Mokoena, the acting City of Joburg mayor at the time of the opening, said: “Residents of this community lived in abject poverty, with no amenities such as electricity, piped water or flushing toilets. The fact that we can open this beautiful park, in this now developed area, is due to the sacrifices of people like Molefe and Ramotse.”

Stellenbosch on a bicycle 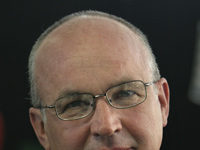 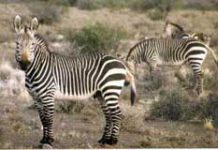