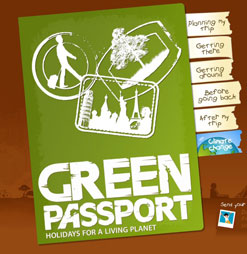 Travellers will find a wealth of tips for
sustainable tourism in their Green Passport.
(Image: UNEP)

The South African Green Passport site has gone live, just in time for the surge of tourists expected to pour into the country to watch the last stages of the 2010 Fifa World Cup.

The site is a joint project of the UN Environment Programme (UNEP), the South African Department of Environmental Affairs (DEA), and the Global Environment Facility, a far-reaching funding initiative involving 182 governments as well as NGOs, institutions and privately held corporations.

The Green Passport programme has been implemented in three other countries internationally, and each time adapted accordingly. The project was piloted in Brazil and has since rolled out in Ecuador and Costa Rica as well. South Africa is the first African country to adopt the scheme.

The Green Passport is aimed at helping visitors in South Africa reduce their carbon footprint by providing simple but useful tips on recycling, green living and responsible tourism.

By making smart choices, tourists can not only make the most of their stay in the country, but minimise their impact on its environment and cultures.

They will also have the chance to support five remarkable greening projects approved by the DEA, doing their bit towards bringing increased economic benefits and better living conditions to local communities.

The first project is the Sunfire Solutions’ solar cookers, which helps to reduce air pollution and deforestation by using only sunlight for cooking, and also eliminates the dangers associated with using open fires in homes.

The second, Soil & More Reliance, focuses on soil composting, creates jobs and rids the environment of green waste and alien plants by turning them into compost.

Lemnis Lighting Africa’s project replaces traditional lighting with energy-efficient LED lights in hotels, offices, homes, and more; while the Mainstream wind farm in the Eastern Cape focuses on renewable energy as a source of power.

The Nova Institute’s Basa njengo Magogo (“light up like a grandmother”, a reference to the elderly citizen who pioneered the technique) domestic fire-lighting project teaches families how to burn coal in a cleaner and more cost-effective way by starting the fire with wood and paper on top, instead of underneath the coals.

The South African Green Passport site provides detailed information on each World Cup host city, in categories such as where to stay and eat, how to get to the fan parks and stadiums, how to recycle waste and make efficient use of resources, and where the sights can be seen.

For instance, people are encouraged not to keep buying bottled water, but rather to refill their existing bottles with South Africa’s tap water, which is rated as the third best in the world in terms of quality. To ensure that their choice of seafood at a restaurant is not on the endangered list, patrons can send the fish’s name in a text message to +27 (0)79 499 8795 and receive an answer within seconds.

Locals will also find that the site’s information can be easily adapted to their own situations.

Green-minded tourists can use the website’s carbon calculator to establish their greenhouse gas emissions, and then offset those emissions by supporting one of the five selected projects. The calculator will suggest a sum based on the user’s established carbon emission. The sum may be paid in full, or in part – all donations are welcomed – by credit card, in support of the project of their choice.

The Green Passport, which is packed with eco-friendly hints and tips, may be downloaded as a PDF (2.85MB) or collected in print form from visitor centres in all nine World Cup host cities, as well as from Fifa environmental volunteers in stadiums. Besides the useful information, there is space at the end of the document for visitors to make their own notes and collect signatures.

A mobile site has also been launched, with all information available at the push of a button on a hand-held phone.

As an added bonus, all travellers who register their green passport numbers at the site will stand a chance to win a two-night stay at the Thornybush Nature Reserve, adjacent to the Kruger National Park in Mpumalanga.

The campaign runs until the end of December 2010. More tips for responsible tourism can be found on the UNEP’s Green Passport site.