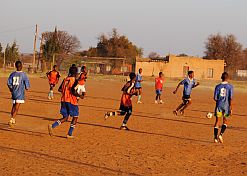 Young footballers in Six Hundred
training in their dusty field. 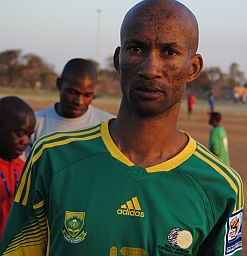 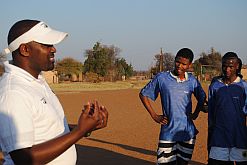 A few years ago, less than five to be precise, I was a village boy with an incalculable passion for playing football, or iDiski as we call it in South Africa’s black communities, and used to dribble with flair.

I played on various fields around my home village of Tweefontein, located in the former KwaNdebele homeland in Mpumalanga province. All the fields were gravel, rough and dusty, and most of us played barefoot.

In fact the fields have not changed, they are still not grassy, and there’s no sign they will change any time soon. But what has changed is that I no longer play football on them – I have moved to the city of Johannesburg, some 100km from my home.

Memories of the days I used to model my playing style on Siyabonga Nomvethe, at that time a darting and goal-banging striker for my favourite team Kaizer Chiefs, came flooding back when I visited North West province recently.

It’s the young footballers of Six Hundred, a district outside Mafikeng, who reminded me of the years which shaped me, the years during which many of us nurtured dreams of becoming top football stars like Benni McCarthy.

It’s truly amazing how many youngsters in villages live for football during their school years, and yet so few go on to play professionally.

As I drove into Six Hundred in the afternoon, the interest in football was unmistakable. Alongside fellow journalists and officials of the North West University Soccer Institute, we passed a number of pebbly fields buzzing with primary and secondary school boys – clear proof that grassroots football in South Africa is alive and kicking.

Our destination was the training session of local team ACS Savagers, which practise and play their home matches on the dusty field we visited. The field is right in the middle of the village and surrounded by some of the players’ homes.

This is where Thabo Mosethle, a teacher at Letsatsing Science High School in Mafikeng, nurtures young football talent. “Players here are passionate, they want to go somewhere,” he said. “The passion for football is there in each and every village in Six Hundred.”

He coaches more than 60 boys in different age groups. “I have many dreams for these boys,” Mosethle said. “One of them is to see some playing in major leagues, maybe the Vodacom League or NFD (National First Division) or PSL (Premier Soccer League).”

One of his protégés will play for a Vodacom League side in Rustenburg this season, he said. “I’ll monitor his movements to see how he fares.” Rustenburg is also in North West, about 160km from Mafikeng.

Mosethle, also a football mentor at Letsatsing, merged three teams from the village to form ACS Savagers. They used to compete against each other as Alfa FC, Cameroon FC and Swallows FC, hence the acronym ACS.

They now play in the local league of the Mafikeng Local Football Association (Malfa). Successful performance under Malfa could be start of big things for ACS and the village.

Being Malfa champions could promote them to a regional league, which is then promoted to the provincial Vodacom League.

The Vodacom League is a gateway to the NFD league, whose victors go through to the elite PSL – where South African footballers make millions of rands annually.

Mosethle does realise what needs to be done to achieve this, and gives his all to his team, including financial support. “I’m the owner, a sponsor, a coach and everything to this team,” he said with an excited expression on his face.

Football experts and students of the North West University Soccer Institute help ACS and other teams in surrounding villages with training, as part of their community outreach programme.

“From day one our students go to communities to run coaching clinics,” said the institute’s director Johan Govea.

Professional trainers at the university, such as Khulu Nsibanyoni, expose ACS players to different methods of playing football, Mosethle added.

An ardent footballer himself, Mosethle is fully aware of the opportunities the institute could provide for his players. Three players he’s mentored, two from ACS and another from Letsatsing school, have already made it into the academy, which offers fully paid scholarships.

“I always tell them: ‘you don’t know who’s watching you’. At least some of my players have got scholarships at the university,” Mosethle said.