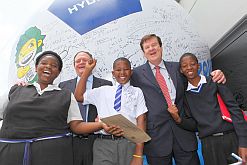 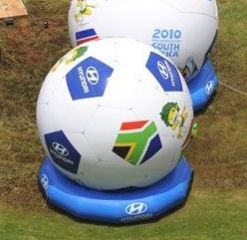 The Hyundai Goodwill Ball road show is taking 32 giant footballs, one for each team that will play in the 2010 Fifa World Cup, to participating nations to collect thousands of fans’ signatures.

The road show is part of the motor manufacturer’s extensive football sponsorship, and according to Hyundai, has become a key event for the company.

Hyundai is the official automotive supplier to the World Cup and has a number of other related initiatives on the go, including the Hyundai Fan of the Match and the Hyundai Best Young Player Award.

The company says that 609 Hyundai passenger cars and vans will be made available for the use of Fifa officials, teams, organising committee members, match officials, and the press.

What’s more is that all national teams will get to travel in style in their own Hyundai Universe luxury coach, each one distinctly decorated with the team colours and flags.

The balls started their journeys at the end of January. This year marks the 11th edition since the inaugural event at the 2000 Uefa European championship. Over the years it has become increasingly popular with fans, as seen at the 2001 and 2006 tournaments in Korea/Japan and respectively.

“It is an honour for Hyundai South Africa to host the global launch of the Goodwill Ball road show for the 2010 Fifa World Cup … getting the ball rolling in early 2010 in Johannesburg as the eyes of the world turn to South Africa,” reads a statement on the company’s local website.

Each 4m-high ball is emblazoned with various emblems, including the 2010 World Cup logo, the sponsor’s logo, the official tournament mascot Zakumi, and the particular country’s flag.

All 32 spheres will return to in May, with their surfaces covered in signatures and good wishes, in time for the opening match between and on 11 June. Festivities have been planned to celebrate the balls’ arrival back in the city.

Once the tournament is underway the balls will follow their respective teams to every match, ensuring that the messages of support are on display for all to read and take inspiration from.

The initiative, says Hyundai, brings fans in all participating countries closer to the magic of the World Cup. Football supporters will revel in the knowledge that thousands of others all over the world are doing the same thing, for the same goal.

“It’s a very unique way of uniting people through this amazing sport of soccer,” said Hyundai South Africa CEO Alan Ross. “From a street vendor in downtown to a high-flying businessman in a boardroom, we’ve all been united behind this event.”

Ross described the Goodwill Balls as a symbol of pride, hope, passion and the uniting power of football the world over, and expressed his pleasure at being able to bring that legacy to for the long-awaited event.

The gigantic South African ball will spend at least three months travelling around the country, stopping in , , , , and .

Fans will get the chance to convey their support not just for national football team Bafana Bafana, but good wishes for their competitors too, thus embracing the goodwill vibe. Those who participate will be able to have their photos taken with celebrities and sporting heroes present. Fans will also be able to enter to win World Cup tickets, tickets to the Goodwill Ball celebration, and other prizes.

Support for the team

Political and sporting figures as well as football celebrities attended the campaign’s January launch at Hyundai Park in Sandton, .

The audience was well entertained by popular local band Watershed, whose new song United by the World made its debut on the day. The song was commissioned by Hyundai especially for the upcoming football spectacular. It is due to be released shortly as the first single off Watershed’s new album, A Million Faces: 20 Hits, 10 Years. The band celebrate their 10-year anniversary in 2010.

Deputy Minister of Sport Gert Oosthuizen said, “Indeed as we said before, Ke Nako for to shine,” echoing the catchphrase of the 2010 Fifa World Cup, meaning “it’s time” in Sesotho.