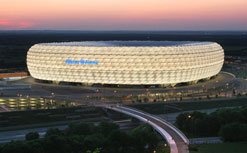 The breathtaking Allianz Arena, home to
Bayern Munich football club, is the venue
for the launch of the Goal4Africa initiative.
(Image: Allianz Arena)

Two teams, comprising the world’s best soccer players, will square up against each other for charity on 12 July 2008 at the Allianz Arena in Munich. This game, the first of a number of such events planned around the world, will see the Goal4Africa programme kick off in style, and at the same time will pay tribute to former South African president Nelson Mandela, who turns 90 in July.

Established in 2008, Goal4Africa is a charity whose vision is to use the “beautiful game” (a phrase first attributed to Brazilian soccer star Didi) to raise funds for sports development and education in Africa in the run-up to the 2010 Fifa World Cup. The organisation’s long-term goal is to make sustainable contributions to peace- and nation-building, social and economic development, and poverty alleviation across the continent.

Mandela himself has stated that his dream is to provide better schooling for African children, as education is the most powerful tool for changing the world and fighting poverty. Now, Goal4Africa brings together education and football, with the aim of building on Mandela’s vision.

The organisation, which hopes to raise $90-million, is driven by a group of experienced sports and marketing professionals. Goal4Africa creator Chris Vermeeren, a former professional tennis player from the Netherlands, is backed by more than 15 years of international sports marketing experience. His colleague, South African event management specialist Nico du Plessis, can boast of working on events such as the Rugby World Cup, the ICC Cricket World Cup, and the 2010 Fifa World Cup.

The other two partners in the initiative, American Ken Simmonds and Dutchman Ivo Roefs, are experts in project conceptualisation and management, and brand building respectively.

Football fans are in for an impressive match with the likes of Liverpool’s Steven Gerrard, Ronaldo and Kaká of AC Milan, Samuel Eto’o of Barcelona, Ruud van Nistelrooy of Real Madrid, Didier Drogba and Michael Ballack of Chelsea, as well as South Africa’s Benni McCarthy of Blackburn, and Sean Bartlett and Kaizer Motaung Jr of Kaizer Chiefs all on the field at the same time.

In addition to the game, fans can look forward to a live entertainment event during which Goal4Africa’s mission will be officially announced, Nelson Mandela’s life story will be retold, and the special Goal4Africa anthem will make its debut. The song features the vocals of British singer Ali Campbell of UB40 and South Africa’s Grammy Award-winning Ladysmith Black Mambazo.

“It’s an honour for me to sing with Ladysmith Black Mambazo,” said Campbell. “To do so at an event that celebrates Nelson Mandela’s 90th birthday makes this even more special.”

The event is scheduled for broadcasting to 41 countries around the world.

Funds will be raised from each goal scored. Sponsors – whether companies, organisations, groups of friends, or individuals – can set a number of conditions for their donations. Examples are a goal scored by their favourite team or player, or any goal scored at amateur level, or a certain amount to match a certain number of goals scored in a season.

Fans from all over the world can also participate over the internet through an interactive goal kicking game, and a smaller version is also planned for mobile phones. As with the live version, supporters will make a donation for every goal scored in the digital games. All that is required is to register on www.goal4africa.org.

Funds raised will be managed and disbursed by a steering committee working with the United Nations. The steering committee comprises the Nelson Mandela Foundation; the Peace and Sport organisation under the patronage of Prince Albert II of Monaco; PricewaterhouseCoopers; Edu Jansing, CEO of the Netherlands-based More than Football Foundation; and Champions for Children, an organisation dedicated to improving early childhood education.

Goal4Africa is partnered by organisations such as the Nelson Mandela Foundation; the United Nations; Peace and Sport; and German football club Bayern Munich, which is donating the use of its home stadium, the Allianz Arena, for the high-profile event.

“The football match of the Goal4Africa world team will be an unforgettable and unique celebration for Mr Mandela’s 90th birthday,” said Mandela Foundation CEO Achmat Dangor. “We are very committed to Goal4Africa as it builds further on Nelson Mandela’s vision: create better education for the children to build a lasting legacy for the future of Africa.”