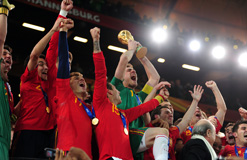 Iker Casillas, captain of Spain, and his
team celebrate victory with the Fifa World
Cup trophy after their victory over the
Netherlands in the 2010 Fifa World Cup
South Africa final match at Soccer City
Stadium in Johannesburg on 11 July.
(Handout image for editorial use only:
Fifa/Getty Images)
• Download high-resolution image

International leaders came out with high praise for South Africa on Sunday, as the country prepared to host the finale of what many have described as the best Fifa World Cup ever.

Addressing the 1Goal Education for All Summit in Pretoria before the final between Spain and the Netherlands, Fifa president Sepp Blatter described the country and its citizens as “role models”. He said South Africa had set an example with both its hospitality as a host nation and its exceptional organisational ability.

“The trust Fifa has put into the country and its people have been answered with a big, big success,” Blatter said. “Thank you South Africa, thank you.”

He joked that everyone had survived the vuvuzelas, even though it did not seem as if they would at the start of the tournament.

“It is an excellent example for other countries,” he said.

Balkenende, who was visiting South Africa for the final, said that earlier in the day he had attended a church service, where vuvuzelas were used during the service.

Despite Spain’s eventual win, the Dutch prime minister was upbeat about his team’s chances, and dismissive of Paul the octopus’s predictions.

“Don’t believe the octopus Paul because the female octopus Pauline from the Netherlands and the small bird Mani from Singapore are predicting another result,” he said.

“The World Cup has drawn the attention of hundreds of thousands of international visitors and millions of viewers to the continent,” he said. “I want to congratulate South Africa for the successful hosting of the World Cup as an African event.”