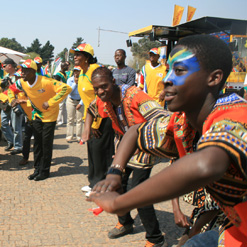 The crowd learning the 2010-themed Diski
Dance at the launch of Football Fridays
outside Soccer City stadium in
Johannesburg.
(Image: Khanyi Magubane)

With under 280 days to go until Bafana Bafana run onto the pitch at Johannesburg’s Soccer City Stadium for the opening game of the 2010 Fifa World Cup, the concept of Casual Day is getting a distinctively South African makeover.

Danny Jordaan, CEO of the tournament’s Organising Committee, and 2010 World Cup mascot Zakumi joined a team of 2010 organisers and communicators at Safa House alongside Soccer City Stadium today to celebrate the launch of Football Fridays, a national initiative to build local support and enthusiasm as the countdown to Africa’s first football World Cup gains momentum.

There are 40 Fridays to go until Friday, 11 June 2010, and South Africans are being urged to mark each one by “dressing down” in a way that will come naturally to a sports-crazy population – by wearing a football shirt to work.

“We are encouraging everyone to adopt Football Friday and to wear the shirt of their favourite team,” said Paul Bannister, acting CEO of Brand South Africa.

“Obviously, we’d prefer it if their favourite team were the national team.”

The initiative will act as an “ignition point” for the campaign, which aims to get citizens to show their unique “South Africanness”, to support the national soccer team, and to be good hosts when the footballing world arrives on the southern tip of Africa in June 2010.

“By wearing a football shirt to work or just socially each Friday, you’ll be showing your true colours as a supporter of South Africa proudly hosting the biggest event in the world,” said Bannister.

Didi Moyle, acting CEO of South African Tourism, also encouraged South Africans to get into the groove of the 2010-themed Diski Dance.

“We encourage every South African to learn the Diski Dance so we can welcome the world and host them with our spirit of celebration and rhythm during the World Cup and beyond,” Moyle said.

At the recent 2010 National Communications Partnership Conference in Johannesburg, Organising Committee chair Irvin Khoza encouraged the country to make the most of the football extravaganza, and to appreciate the vast scale of the project.

“We won’t get another marketing opportunity like this in the next 100 years,” he said. “With the Fifa Confederations Cup now behind us we need to feel that the show is in town. This is the real deal.”