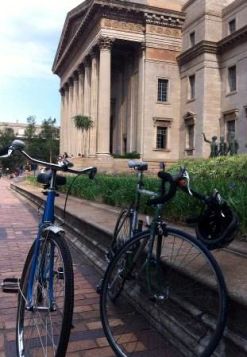 Wits University campus in Johannesburg is to become a very different place, if the people who have formed Cycle Wits get their way. It is made up of a group of students and staff who already cycle to or from campus, and who believe in the “transformative potential of commuter cycling”.

“We are committed to working with the university to provide input from the perspectives of commuter cyclists, and to helping to grow and nurture a culture of commuter cycling on our campuses,” the group stresses on its blog.

The idea is to get the university involved in getting students and staff out of their cars and on to bicycles, to relieve the congestion and parking problems on campus. Cycle Wits has compiled a document outlining its strategy, which involves the university becoming proactive about making the campus more bicycle friendly – at the same time reducing fuel emissions and enhancing the health of Wits students and staff, commonly called Witsies.

“Many Witsies would like to cycle but are afraid of the traffic on the roads near campuses, which can be especially congested and daunting,” states the document. “Although the university cannot control traffic situations outside of its jurisdiction, it can contribute to raising awareness of cyclists on the road, and help to educate Wits cyclists in safe cycling practice and rules of the road.”

At present there are no safe cycle lanes, lock-up areas or signage on campus to make it easy to commute via bicycle.

Universities around the world are generally bicycle friendly, often in cities where bicycles are used by millions as their main source of transport. Johannesburg is a car-dominant city, a result of historically poor public transport systems. South African universities follow the same pattern, but it seems bike transport is now catching on.

Rhodes University in Grahamstown, in Eastern Cape, lends itself more to bicycles, which are in evidence in the town and on campus. The recently formed Saints and Sinners Cycling Club on the campus replaces the defunct Rhodes University Cycling Club, and committee member Christopher Johnson hopes that forming the club will encourage more cyclists on campus and in the town.

“What we’re trying to do is create a group that is open to anyone, regardless of their experience or skill,” Johnson told Grocott’s Mail, the local newspaper, in October 2012. “It is also a fantastic social experience to be part of and links you to a network of people who, regardless of how different, share the same interest. We would like to restore cycling to what it has always been in this town.”

The group is proposing a range of interventions at Wits to make campus and its users more bike-conscious: signage to raise awareness of bicycles; tuition on how to ride a bike; free safety equipment like helmets and high visibility jackets; the construction of cycle routes on campus; erection of bike lock-up racks; and the creation of safe bike lanes between its various campuses.

Nicky Falkof, a lecturer in Wits’ media studies department, is one of the founder members of the group. She lives in Melville and cycles to the university every day. She knows of some 30 people who cycle to work from the nearby suburbs at present. However, she sees more and more bikes on campus. Off campus, she cycles around Melville and surrounding suburbs although she has a car, which she uses at night.

Cycle Wits has got the ball rolling, with a meeting with the university’s management in mid-March. Its proposal was greeted with enthusiasm, with “a clear sense that investing in commuter cycling was considered something that would be extremely beneficial to the university in the long run”.

Falkof says that there are plans to have bike racks around the campus installed within three weeks, and bike lanes possibly in place by the end of the year. “Wits management is keen and committed. It makes sense for them as the public transport infrastructure is overloaded.”

The group has also encouraged the university to get the City of Johannesburg to declare the entire university precinct, from Wits in Braamfontein and its campuses in Parktown, to Westdene and Doornfontein, where many students live, as the city’s first bicycle-friendly zone. This would mean creating dedicated safe cycle lanes between these campuses and suburbs, with lock-up facilities.

For its part, the City has plans to create bicycle lanes, outlined in its 2011 Growth and Development Strategy. It plans to create these lanes in two Soweto suburbs initially, Noordgesig and Orlando, the former mayoral committee member for transport, Rehana Moosajee, told Talk Radio 702 in a January 2013 interview.

Cycle Wits also wants the university to lobby the high-speed commuter Gautrain to allow bicycles on the trains, to encourage more bike commuters from further afield.

Falkof says the group has tuned into the Johannesburg Urban Cyclists Association, which promotes and defends the use of the bicycle as a day-to-day transport solution. “Our goal is for Joburg to be bike-friendly by 2015, a deep transformation that requires massive changes in infrastructure as well as in mindsets!” the association says on its website.

One of its first moves in this direction is the creation of the Joburg Bicycle map, which can be downloaded and allows you to plan your bike routes using the less busy roads.

Cycle Wits has other big plans: it hopes to get the university to allow bicycle retailers on campus to supply bike spares to commuters, and to run workshops on campus on basic bike maintenance. The group also wants the university to offer incentives to staff and students to get on their bikes, by organising leisure rides on weekends, including participation in the popular monthly Critical Mass ride, a worldwide movement by cyclists to take back their city streets from motorists.

Critical Mass has been running in Cape Town for several years; it is approaching its second birthday in Joburg, and now attracts close to 2 000 cyclists on the last Friday of every month.

Having cycle days, on which students and staff are encouraged to come to work by bike once a week, is another proposal. It also wants to see experienced cyclists act as mentors for novice cyclists, to coach them on cycling techniques and to give general advice.

Cycle Wits has a Facebook page, which gives information to bike commuters. A post indicates that showers and change rooms on East Campus are available for bike commuters.

Mountain biking in particular has become big in South Africa, with races held every weekend across the country. There are also several world-class endurance cycling events, like the Cape Epic, an eight-day 800km mountain bike event, climbing in total 15 000m over some of the most beautiful mountain passes in Western Cape. It attracts cyclists from around the world.

The Freedom Challenge is a gruelling 2 300km mountain bike race, from Pietermaritzburg in KwaZulu-Natal to Paarl in Western Cape, over several mountain ranges and across the semi-desert Karoo. It is held in the middle of winter, and has been running for the past 10 years. In the past few years remarkable records have been set, with last year’s race completed in 10 days and 16 hours.

Other shorter, multi-day mountain bike events include the Sani2C, a three-day race from Sani Pass at the foot of the Drakensberg mountains to Scottburgh on the southern KwaZulu-Natal coast, with riders enjoying splendid green valleys and lush sugarcane fields. The Berg&Bush is another three-day KwaZulu-Natal mountain bike race, taking in some of the historic battlefields of that province.