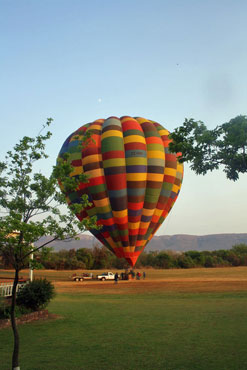 Bill Harrop’s balloon safari company in
the Magaliesberg area is well-established
and reputable. 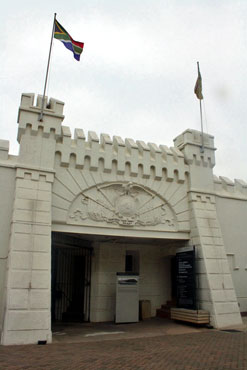 The exit from the Old Fort, with the
inscription “Eendracht maakt macht”
or “Unity is strength”. 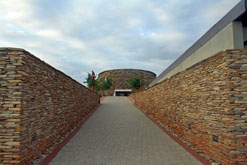 The visitors’ centre at Maropeng, in the
Cardle of Humankind, is shaped like a
tumulus or burial mound.

The Gauteng Tourism Authority makes
its mark on the central courtyard of the
Nanhua Buddhist temple.
(Images: Janine Erasmus)

Building on the momentum of the 2010 Fifa World Cup, the Gauteng Tourism Authority launched a new campaign in late September to promote domestic tourism in the province.

The event coincided with the country’s Tourism Month, which this year focused on a variety of local destinations – one of which is Limpopo province, with its wealth of cultural and natural attractions, including the world-famous Kruger National Park.

“The platform is there,” said Gauteng MEC for Economic Development Firoz Cachalia at the campaign’s launch. “Tourism shouldn’t be completely dependent on international tourism, so we want to encourage our residents to enjoy their amazing place.”

Gauteng premier Nomvula Mokonyane agreed, saying that many Gautengers have a limited knowledge of their own province. “We may not have access to a beach, but everything else is here in Gauteng. However, thus far we haven’t been able to sell this jewel to the locals.”

Mokonyane added that tourism should also teach people about their heritage. “It’s all here in Gauteng – we have lions, Mrs Ples, Constitution Hill, Maropeng, Soweto. But to fully take advantage of these treasures we must integrate public transport.”

The provincial government is currently revamping the public transport system, with a new bus rapid transit system and high speed rail service under construction – but for carless people to be able to reach these scenic spots, more must be done.

Another important aspect of a heightened tourism industry is job creation, while entrepreneurs such as B&B owners will also benefit. The provincial government has plans to construct an extensive database of tourism operators and B&B owners, and link these to established facilities, so that visitors can put together a package to suit their pocket.

“People can grow their businesses by targeting local tourists,” said Cachalia. “You don’t have to depend on international visitors. With better domestic tourism, people will develop better products for the local market, and by extension, the international market.”

A more lively domestic tourism sector will lead to sustainable international tourism, said Mokonyane. “A country that doesn’t promote domestic tourism can’t expect other tourists to come, because the locals won’t know where to take them.”

The Gauteng Tourism Authority has a training programme for tourist guides, said chairperson Khehla Mthembu, and also registers them on the website as qualified and approved by the organisation.

The new campaign, called The Amazing Place, is not only aimed at Gauteng residents – it will run nationally as well.

According to the Department of Tourism, some R70-million (US$10-million) was spent since 2004 to promote South Africa’s diversity of destinations. This sum encompasses a range of media genres, including outdoor, TV, print and radio advertising, as well as specific events.

According to figures available from South African Tourism, South Africans made some 30.3-millon domestic trips during 2009, whether for holiday, business, medical, religious, or other purposes.

The local travellers spent a total of R22.4-billion ($3.2-billion) on their trips, with an average of 4.2 nights per trip.

The figures also show that of all the provinces, Gauteng residents are the ones who most prefer to travel to other provinces – just 32% of them travel intra-provincially. This means that the Amazing Place campaign has come at the right time.

Race around the province

An important element of the Amazing Place campaign is an exciting TV show, based on the popular Amazing Race programme which keeps millions of viewers around the world glued to their screens.

The Gauteng Tourism Authority was supported in this initiative by local radio station Kaya FM and Chevrolet, who supplied the cars.

“After the World Cup we are stepping up the action with this unique race that highlights Gauteng’s tourism routes both to outsiders and residents within the province,” said Mokonyane.

Filming took place at the end of September and saw eight plucky contestants in four teams making a 48-hour dash around the province, chasing clues and hoping to be the first across the finish line. Along the way they experienced some unusual sights and sounds, and were treated to the best the province has to offer, as well as the diversity of its culture.

The series, which will comprise at least four episodes, is scheduled to air at the beginning of November on DStv bouquet channels and the SABC. It will be presented by Kaya FM’s Bob Mabena.

The race started in the now-defunct women’s prison in the Old Fort at Constitution Hill in Johannesburg. First a fort and then a notorious prison, the site has undergone a remarkable reversal of purpose and is now the seat of the highest court in the land. The women’s prison was added 15 years after the original fort was built in 1892.

On the first day the contestants visited the 94ha Rondebult Bird Sanctuary in Ekurhuleni east of Johannesburg, the Vaalnest Boutique Hotel on the banks of the Vaal Dam in the tiny town of Vaal Marina in south Gauteng, and the ever-popular Maropeng in the Cradle of Humankind, which was also the pit stop for the day’s proceedings.

On day two they set off for the nearby Magaliesberg Mountains and a lofty appointment with Bill Harrop, who runs a popular hot-air balloon safari company, before heading north for Freedom Park in Pretoria and a glimpse of the country’s heritage. The park is a monument to democracy and features a Wall of Remembrance, inscribed with the names of those who fell during the struggle for freedom.

The race ended at the magnificent Nanhua Buddhist temple, the largest Buddhist seminary and temple in Africa. This breathtaking facility is situated in Bronkhorstspruit, about 90km from Johannesburg’s city centre.

It is hoped that the concept will be rolled out to other provinces and cities around the country.