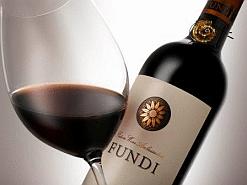 The Fundi range of wines is a
classy addition to any table.
(Image: Fundi Wines)

South Africa’s reputation as a producer of world-class wines is well deserved. Now the local wine tourism industry is about to get a boost with Project Laduma, which aims to train 2010 new wine stewards before the 2010 Fifa World Cup, while the project’s recently-launched Fundi wine range will help to generate the funds needed for training.

Laduma means “it thunders” in isiZulu and is a popular shout at football matches when a goal is scored. The wine’s name is derived from the isiZulu word umfundi, or learner. In colloquial South African English the word refers, appropriately, to an expert.

Laduma is the brainchild of Wines of South Africa (Wosa). “We identified a need in the industry for better service,” says Andre Morgenthal, Wosa communications manager. “In the wine tourism industry service excellence is one of the keys to success, and this is true of similar regions all around the world. We need well-trained front-of-house staff in our restaurants and wineries.”

As a tourism destination South Africa ranks among the world’s best. The wine regions in the Western and Northern Cape provinces, and KwaZulu-Natal, which is also classified as a Wine of Origin geographical region, are among the most scenic to be found anywhere, and this adds immensely to the value of the local wine tourism industry.

But in order to remain competitive, South Africa’s wine tourism industry must maintain pace with the rest of the world, and this is where Project Laduma will play an important role. Not only will it give previously disadvantaged people the skills to forge a career in the hospitality and wine tourism industries, but it will also ensure that visitors to the country get top-class service by knowledgeable wine stewards.

All training is undertaken by well known hospitality training company Let’s Sell Lobster. The company uses innovative methods that build confidence and personality, resulting in trained staff that fully understand their particular roles in the industry and possess the skills and knowledge to deliver a five-star service. The company has worked with a number of leading wine estates including Paul Cluver, La Motte and L’Ormarins.

The course is supported by the Federated Hospitality Association of South Africa and accredited with the Sector Education and Training Authority, which focuses on skills development. Let’s Sell Lobster issues certificates on completion of the course, and also assists with placements afterwards. Wosa hopes that some graduates will go on to become fully fledged sommeliers.

A sunflower for hope

As a wholly industry-driven initiative Project Laduma is of necessity also funded from within, and to raise the R4.5-million (US$420 000) necessary to train 2010 wine stewards Wosa has established Fundi, a classy new red wine brand which is available to the trade, in licensed and retail outlets in South Africa and overseas, and online at the Fundi website or Cybercellar. About 20% of the 17 500 six-bottle cases on offer is destined for overseas shelves, while the remainder will be sold in South Africa.

All proceeds will go towards Project Laduma’s training programme, because every aspect of Fundi’s production has been completely sponsored, from supply of bottles and corks to label design and printing, legal work, website development and publicity.

One of the distinguishing characteristics of the brand is its logo, the stylised sunflower, which signifies hope and the enduring African sun. The well-known South African craft of beading also features on the bottle in the form of a beaded decoration that can be used as a wine glass marker. There are six different designs to collect.

All local wineries were invited to submit samples for selection to the brand, and the final six were selected in a blind tasting by members of the Cape Winemakers’ Guild. The six wineries are Anwilka, Hartenberg, False Bay Vineyards, Waterkloof, The Company of Wine People and Stellekaya.

The wild side of wine

The wine steward course is an advanced one that extends over five days and equips trainees with essential knowledge of wine varieties, wine regions, food and wine pairing, and wine service skills. While some trainees are drawn from the industry, many are complete oenological novices and therefore a fresh approach was needed to make it easy for them to understand wine.

Dispensing with technical jargon such as terroir, acidity and fining, Let’s Sell Lobster simply likens popular cultivars to local species of wildlife, making it much easier for trainees, many of whom are previously unemployed or if employed in the industry, in possession of very little wine knowledge, to identify with the characteristics of the wine – and to explain it in those zoological terms to enchanted wine-lovers. Let’s Sell Lobster calls this the “Bush Logic” technique.

Red wines are referred to by animal names and white wines are represented by birds. For instance, the elegant Cap Classique is a giraffe, while Cabernet Sauvignon, the dark-coloured wine with the heaviest structure, is an elephant. A bold Shiraz is a rhino, and a Chardonnay is a fish eagle, known for resting in trees like the wine itself, which rests in an oak barrel during the aging process.

Already over 120 trainees have graduated and, says Morgenthal, there have been some heart-warming tales to tell. “One of our wineries had a lady who used to sweep the floors – she showed interest in learning more about wines, so they sent her on the course and now she is serving their patrons.

“Another lady worked in the actual vineyard and one day some visitors arrived at the winery to find that there was nobody available to help them with tasting. She stepped in and of course the owners noticed, so later they asked her if she would be interested in the course. She was, and now she is one of their front-of-house staff.”