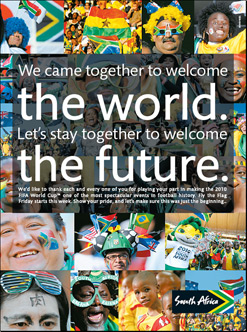 Brand South Africa is to keep the momentum of solidarity and national pride built up in the country during the 2010 Fifa World Cup by morphing its successful Football Fridays campaign into a new Fly the Flag Fridays initiative.

The campaign, which already has its own website and Facebook page, has been endorsed by South African President Jacob Zuma in a speech delivered the day after the final whistle of the tournament was blown.

“The Football Fridays campaign became highly successful,” he said. “South Africans from all walks of life proudly wore national colours every Friday. It was a meaningful collective experience of a lifetime.”

Zuma then reminded South Africa that while the Fifa World Cup is over, the country could still look forward to more sporting triumphs to come.

“As we draw the curtain on the 2010 Fifa World Cup, we now turn our focus to the fortunes of the nation’s Springbok Rugby Team in the Tri-Nations Series,” he said.

“Let me remind South Africans that we are the reigning Tri-Nations and Rugby World Champions. Therefore, do not pack away those rainbow nation flags just yet. National duty still calls.”

Fly the Flag Fridays will be an ongoing campaign, with Brand South Africa encouraging South Africans to wear colours of their flag, to keep flying the flag on their vehicles and at their homes and offices, and to embrace the spirit created during Africa’s first, full-colour World Cup.

The campaign urges people to:

“By continuing to stand together, there is nothing we cannot do,” says Miller Matola, chief executive of Brand South Africa. “As our visitors go home, let us remind them to keep coming back to South Africa because we are a nation proud of its achievements, and a country that is open for business.”