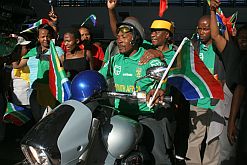 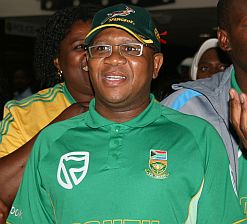 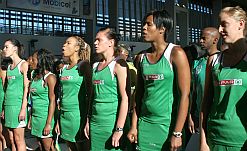 Members of the national netball team that
will play in Singapore in July.
(Images: Bongani Nkosi)

The frenzy that gripped South Africa before and during the Fifa World Cup in 2010 is set to make a comeback, this time spurring other national sports teams to excel in international competitions.

Magnificent Fridays is a new campaign initiated by the government to get South Africans behind cricket, netball and rugby national teams – all of which will all do battle in respective world cups during 2011.

The campaign is built on the concept of Football Fridays, a highly successful drive that got South Africans rallying behind Bafana Bafana, the national football team, and the 2010 Fifa World Cup.

The country was awash with yellow and green at the end of every working week leading up to the tournament as South Africans donned Bafana replica gear and flew the national flag with pride. And the same spirit is to grip the land again.

This time citizens are urged to wear official replica clothing of any of the national teams, but especially of the Springboks rugby team, the Proteas cricket squad and the netball team, also nicknamed the Proteas. Wearing the now-famous Bafana gear is also encouraged, and hoisting the national flag tops it all.

“Magnificent Fridays is about showing support for all our national teams,” said Minister of Sport and Recreation Fikile Mbalula. “The campaign will continue throughout the year.”

Mbalula and Minister of Arts and Culture Paul Mashatile are helping spread the hype across the country. The departments launched Magnificent Fridays in Johannesburg recently, and kicked off the actual road show at the city’s Park Station on 28 January.

Thousands of South African flags will be handed out along the way as the road show delivers the spirit of the campaign to outlying communities. The next stop is the Free State province, and then the Western Cape, followed by stops in all the remaining provinces and then the major cities.

“We’ll go all over South Africa. This is not a Gauteng campaign,” said Mashatile.

The Proteas will be the first of the three national teams to seek international pride in 2011 when they travel to south Asia in February. They will take on other 14 nations in the 2011 International Cricket Council World Cup to be staged in India, Bangladesh and Sri Lanka.

The team is in the final stages of preparation for the tournament and is in good spirits following recent victory in the highly contested one day international series challenge against India.

Magnificent Fridays will augment the Pure Protea drive, which was initiated by Lead SA specifically for the national cricket squad.

Support for the team is mounting ahead of the world cup, Cricket South Africa (CSA) said, and Proteas replica attire is proving to be very popular.

“There is a big interest in the Proteas world cup replica jersey,” said CSA brand and corporate relations manager Kass Naidoo. “Traffic to the online store has increased and merchandise at retail stores has been selling well.

“Everyone is keen to show they are 100% behind the Proteas,” Naidoo added.

The Springboks, as the reigning Rugby World Cup champions, will set out to defend their title in New Zealand in September.

Pinned against Fiji, Namibia, Samoa and Wales in Pool D, the Springboks will face challenging, but surmountable competition in the group stages. The team has proven its mettle many times and should also be able to rise up against stronger teams like New Zealand and Australia in the knockout stages.

It should come as a confidence boost that Chiliboy Ralepelle and Bjorn Basson, the Boks pair recently accused of doping, were cleared of any wrongdoing on 28 January. They can now return to the international field to help the team prepare for their world cup.

The Springboks’ victory in 2007 was a major highlight that South Africans celebrated with vim and vigour for days, as was the country’s historical win in 1995.

The senior netball team will travel to Singapore for the world championships in July, and is currently training hard.

Netball South Africa announced on 24 January that four coaches had been appointed to help the players prepare for the tournament, following the resignations of coach Carin Strauss and assistant coach Cecilia Molokwane earlier in the month.

South Africans have also been urged to travel with the teams to support them at the playing venues. “Those who can go to these competitions should go,” Mashatile said.