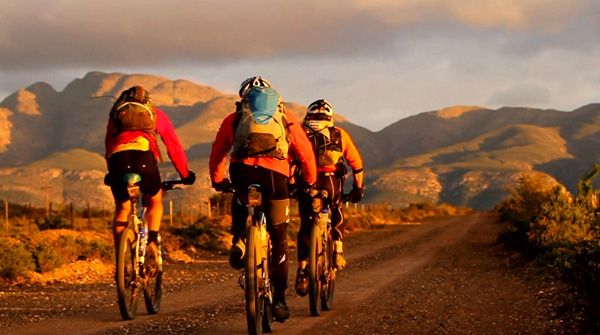 In the next week or two, 75 extreme athletes will start the Freedom Challenge, a mountain bike race from Pietermaritzburg in KwaZulu-Natal to Wellington in Western Cape, covering a distance of 2 300 kilometres over some very rough terrain.

Over many years, South Africans have created some of the world’s toughest races, pitting themselves against the most extreme conditions in the country – whether it’s on freezing, rushing rivers, or miles and miles of tar in the scenic Western Cape, or over mountain ranges on bikes.

The Freedom Challenge takes participants up and over several of South Africa’s most remote and beautiful mountain ranges, and across the endless semi-desert Karoo, into the winelands of the Cape. It is done in June, the middle of winter, which means that conditions include blizzards and snow, fierce wind, and below zero temperatures. Riders face an overall ascent of 37 000 metres over the 2 300 kilometres, to be done in a time limit of 26 days. Finishers don’t get a medal or cash – just a colourful Basotho blanket.

“Winter. Snow. Flooding rivers. Freezing cold. Long days in the saddle. Major mountain ranges to cross. Flooded rivers to ford. Long portages. Massive climbs. Rhino. Buffalo. Sleep deprivation. Broken bikes. Broken bones. Broken spirits. These are but some of the things with which riders in the 2014 Freedom Challenge which starts on Monday 9 June 2014 will need to contend,” indicates the website.

Support stations are positioned every 100 kilometres, where riders get meals, a bed and a chance to wash their gear. They are not permitted to carry a GPS, and must rely on maps and written directions from the race organiser, David Waddilove, who is based in Wellington.

Lots of time to think

Waddilove started the Freedom Challenge in 2004, when he ran the 54km Two Oceans Marathon in Cape Town, and then continued running all the way to Pietermaritzburg, where he then ran the 90km Comrades Marathon between Durban and Pietermaritzburg. “Whilst I was running I had a lot of time to think about things. It became clear to me that the route could not easily be travelled on foot but would work well as a mountain biking route,” he says.

And so the Freedom Challenge came about. A shorter version is the Ride to Rhodes, the first 480 kilometres of the challenge, which can be done as a race on its own. Rhodes is a small village in Eastern Cape, along the Freedom Challenge route. Some 42 riders will be taking on this shorter challenge this year, with several of them hoping to do the distance in a sub-48 hour time, requiring them to do it on virtually no sleep.

There is an extreme version of the Freedom Challenge, which consists of running the Dusi Trail Run, an 80km run from the outskirts of Durban to the periphery of Pietermaritzburg, largely along the banks of the Umgeni River. Then pulling out a bike and riding to Wellington, then grabbing a kayak and paddling the Berg River Race, a four-day 240km race in the Cape. Just 11 people have done this race, while some 149 people have done the complete challenge.

Mountain biker Rory Field did the race in 2012. He says the most enjoyable part was “being in the wilderness and being sufficient to the task”.

In 2013, a new record was set when married couple Jeannie and Martin Dreyer finished the race in a mind-blowing 12 days, five hours and 55 minutes. Jeannie broke the women’s record by seven days, and beat 41 men and five women to the finish line. She averaged an extraordinary 200 kilometres each day, sleeping three to four hours a day, except for two days when she was off her bike for around nine hours. Martin finished the race in 2012 in 10 days, 16 hours and 40 minutes, a new record.

The trail cuts through 4.5 billion years of geological time and through six plant biomes. It follows historical migration routes, and riders experience different local languages and cultures along the route. They stay in huts, B&Bs or hunting lodges – “this whilst riding through some of the most visually spectacular parts of the country”, adds Waddilove.

Besides the Ride to Rhodes, which can be done as a non-stop event in June, there is a supported version done in September when it is warmer. “It is quite feasible that this will extend further with a 1 000km non-stop ride from Rhodes to Cape St Francis using international randonneurring rules.”

Waddilove has plans to extend the race north to Beit Bridge, and even further, to Mount Kilimanjaro, in a ride that would start in Cape Town and end in Tanzania.

But for the participants it is much more. “Riders travelling the trail have spoken of how it has afforded them a valuable and positive insight not only into this country, [but also into] themselves.”

In all, 155 people have been given blankets, 17 of whom are women; and 68 of whom them have come back to do the race several more times.