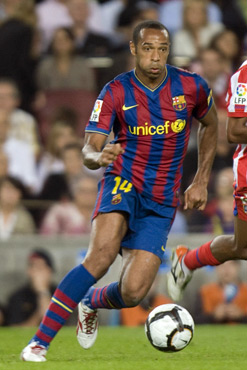 Thierry Henri is one of the international
football superstars that have become
Sports Ambassadors for the Brothers for
Life campaign. His club, FC Bracelona, has
a long association with Unicef, one of the
organisations behind the campaign.
(Image: FC Barcelona)

International football superstars such as Ryan Giggs of Manchester United and FC Barcelona‘s Leo Messi and Thierry Henri are throwing their weight behind a new campaign by South African organisation Brothers for Life, which calls on men to “yenza kahle” – do the right thing – in tackling the spread of HIV and violence against women and children.

The campaign kicked off just 10 days before the start of the 2010 Fifa World Cup in South Africa, a month-long extravaganza set to attract hundreds of thousands of foreign football fans.

“There’s going to be lots of drinking, probably quite a lot of sex, and we want to encourage people to be safe,” said Dean Peacock, co-director of Sonke Gender Justice, one of the organisations behind the campaign.

They will promote messages on television, radio and outdoor advertising about the HIV risks of alcohol and unprotected sex, the use of condoms and the dangers of multiple sexual partners. The campaign will also mobilise men to be tested for HIV as part of the government’s new campaign to get 16-million South Africans tested.

In South Africa, men tend seek HIV/Aids testing and treatment less than women, yet they have not been the main focus of prevention campaigns. “Once again we call upon men of all classes and races to join the fight against HIV and Aids, occupying the front trenches in this war through their social conduct,” said Kgalema Motlanthe, South Africa’s deputy president.

“When good men don’t stand up to be counted, HIV and Aids spreads.”

The campaign is endorsed by the South African National Aids Council and the national Department of Health, and backed by Johns Hopkins Health and Education in South Africa and the United Nations Children’s Fund (Unicef).

“We want to use spokespeople who have the status necessary to influence the behaviour of everyone who’s coming here,” said Peacock. In addition to putting their faces to the advertising, the South African Sports Ambassadors will also appear at events to promote the campaign.

“Men have the power to make an enormous difference in their own lives, and in the lives of their children and partners,” said Elhadj As Sy, Unicef regional director for Eastern and Southern Africa. “The Brothers for Life Sports Ambassadors campaign shows them the way.”

The involvement of the Manchester United and FC Barcelona footballers comes out of Unicef’s long partnership with the clubs. In 1999 Manchester United launched United for Unicef, and the club has been a strong partner in the Unite for Children, Unite against Aids campaign launched in 2005 to make children a priority in the global fight against HIV/Aids.

FC Barcelona signed a global agreement with Unicef in 2006, and its players have since worn Unicef branding on their shirts. The club has also donated €5-million to the child welfare organisation over the past three years – with much of the money going to HIV prevention – and pledged a further €3-million over the next two years.

The sportsmen taking part in the Brothers for Life Sports Ambassadors campaign: