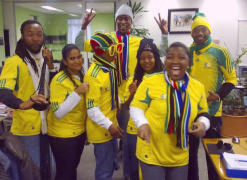 South Africans are once again urged to show their support for Bafana Bafana by donning football shirts during Afcon 2013.
(Image: Janine Erasmus) 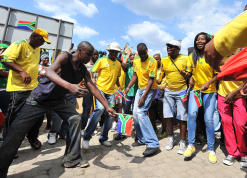 With the Orange Africa Cup of Nations (Afcon) 2013 kick-off just hours away, South Africans are urged to show their support for national football team Bafana Bafana by wearing their yellow football jerseys during the tournament.

The Football Fridays campaign was launched a year before the 2010 Fifa World Cup, which took place in South Africa. The campaign was endorsed by South African President Jacob Zuma in a speech delivered the day after the final whistle of the tournament was blown.

“The Football Fridays campaign became highly successful,” said Zuma. “South Africans from all walks of life proudly wore national colours every Friday. It was a meaningful collective experience of a lifetime.”

After the World Cup Football Fridays evolved into Fly the Flag Fridays and today is known as Magnificent Fridays as it covers all sports in South Africa and not only football.

In his post-2010 speech Zuma reminded South Africa that there were more sporting triumphs to look forward to – if not on the field then certainly behind the scenes with the successful staging of a number of global sporting events.

Since then events such as the 2012 Champions League T20 cricket tournament have brought thousands of visitors to the country.

At the launch in November 2012 of Magnificent Fridays for Afcon, the Department of Sport and Recreation said that the campaign plans to recapture the sense of national pride South Africa experienced during the 2010 Fifa World Cup, and encourage them to rally behind Bafana Bafana.

“Hosting the Afcon opening match and final in Gauteng is another massive feat for the province,” said a department spokesperson, “and through this campaign we want to ensure that people in the province become a part of the journey to crown Africa’s champion, right here in the home of champions.” 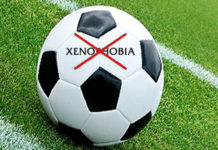 Sport is fighting against xenophobia