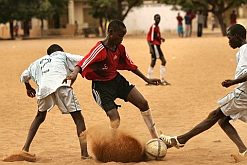 Each year the Diambars Academy in Saly,
Senegal, takes in 48 street children, giving
them a home and education for the next
five years. (Image: Fifa) 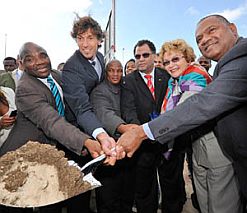 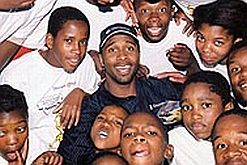 Fifa has announced the 32 teams that will take part in South Africa’s 2010 Fifa Football for Hope festival – an initiative with social change at its heart.

Football for Hope is a global Fifa project that promotes education, empowerment, peace, positive change and children’s rights through football.

As part of its corporate social responsibility strategy, the world football body has allied with the Berlin-based humanitarian profit organisation streetfootballworld to use football to create a better world, in line with the United Nations’ Millennium Development Goals.

The Football for Hope tournament takes place over two weeks in July 2010 in the township of Alexandra, east of Johannesburg.

A specially-built stadium and the expected influx of football-mad visitors will provide a huge boost to the area. Alexandra Football Association president, Moses Selolo, said residents of Alex, as it is known locally, are “over the moon”.

Football for Hope will be an official World Cup event for the first time. Announcing the line-up, Fifa president Sepp Blatter expressed his high hopes for the event.

“The Football for Hope Festival will be a unique opportunity for organisations using football as a tool for social development in every part of the world to interact with each other and to showcase their programmes on football’s biggest stage – the 2010 Fifa World Cup,” he said.

The line-up features over 50 outstanding social football organisations from 32 countries as far-flung as Tahiti, Bosnia and Herzegovina, and Ecuador.

There are 13 teams from Africa including the host team from Alex, eight teams from the Americas, two each from Asia and Oceania, one from the Middle East, and six from Europe.

Among these are the Peace Team from the Israel- and Palestine-based Peres Center for Peace and Al Quds Association respectively, the Kilifi-based Moving the Goalposts that uses football to promote leadership among previously disempowered Kenyan women and girls, and Colombianitos which works with children affected by violence in war-torn Colombia.

Other participating organisations strive to address landmine awareness in Cambodia, give purpose to street children in Senegal, further HIV and Aids education in South Africa, and help to integrate humanitarian refugee youth and their families into Australian society.

These are just a few of the many football programmes around the world that offer hope and direction to children who would otherwise have none.

While celebrity football stars battle it out in stadiums around South Africa, the Beautiful Game will take on another dimension in Alex.

The unique feature of the Football for Hope programme is that there are no referees. The mixed teams of boys and girls, aged between 15 and 18, are encouraged to resolve conflicts on the field themselves, through dialogue and negotiation.

Having learned the art of dialogue in the game, the children take those skills with them into their communities.

Teams will also work together in workshops and other activities, while cultural celebrations will highlight the diversity of participating nations. The organising partners hope that 2010 Football for Hope will help to heal the scars of the xenophobic terror that rocked Alexandra, and other communities, in 2008.

Since 2007 and until 2010, the main focus of Football for Hope is the African continent. One of the programme’s goals is the construction of 20 Football for Hope centres – five in South Africa and 15 elsewhere on the continent – by 2010 at a cost of an estimated US$10-million (R82-million).

The 20 Centres for 2010 is the official campaign of the World Cup and will result in a legacy of football and sustainable change that will endure long after the tourists have gone home.

Together with Fifa and streetfootballworld, the project will be implemented by the non-profit organisation Architecture for Humanity and artificial turf pioneer Greenfields.

“Our vision is that these centres will become hubs for cooperation and exchange among local organisations here in Africa, as well as on a global level,” said streetfootballworld MD Jürgen Griesbeck.

Construction of the first of these centres got underway in Khayelitsha township in Cape Town at a sod-turning ceremony in May, attended by Griesbeck, Western Cape premier Helen Zille and Local Organising Committee CEO Danny Jordaan, among others.

South African NGO Grassroot Soccer will manage the Khayelitsha centre. Each facility will consist of a one-star artificial turf and space to house social, healthcare and economic programmes.

A one-star turf is used mainly for recreational and community purposes, but still has to successfully pass both laboratory and field tests to earn Fifa’s stamp of approval. A two-star turf is used for professional games.

At the three-day Football for Hope workshop held during the Confederations Cup in June, Sepp Blatter announced the appointment of former Bafana Bafana and Leeds United captain Lucas Radebe as the initiative’s ambassador.

Since his retirement from football in 2005, Soweto-born Radebe has worked as an ambassador of Fifa for SOS Children’s Villages to promote football for social development amongst youngsters.

“I appreciate this appointment by Fifa to serve on this project,” he commented on his new role. “As a youngster from Soweto, our hope has always been football.”