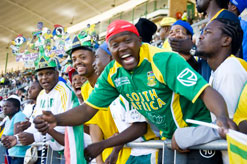 The Cape Town stadium will have its
final World Cup trial when the international
youth challenge kicks off in April.
((Image: MediaClubsouthafrica.com. For
more free photos, visit the image library)

Some of the world’s best young footballers will battle for top spot in the Cape Town International Challenge, which kicks off on 8 April.

Between 8 and 10 April, under-20 teams from Nigeria, Brazil, Ghana and host nation South Africa will take the field at the brand-new Cape Town stadium. This showpiece was completed in 2009 and officially handed over to City management on 14 December 2009, six months ahead of the World Cup kick-off on 11 June.

The 69 000-capacity stadium is the pride of the city and has hosted three events already – a football and rugby game, and a religious gathering. During the World Cup the stadium will host five first round matches and one second round game, as well as one quarter-final and one semi-final.

The Cape Town International Challenge will be its first multi-national football event, as well as the final one before the long-awaited world football spectacular gets underway.

It will also be the first – and only – chance for the stadium management to test the venue’s night time capabilities. Seven of the eight World Cup matches take place under floodlights.

The South African under-20 team, Amajita (isiZulu, meaning “the guys”), and Nigeria face off at 16h30 on 10 April, while Ghana and Brazil play at 19h00. The first round takes place on 8 April at the famous Newlands Stadium with Ghana and Nigeria playing at 14h00, followed by South Africa and Brazil at 18h00.

The South African Football Association has made 65 000 seats available for the event. Tickets will cost R20 (US$2.80) or R30 ($4) and will only be available from Computicket. Fans arriving at the gates without a ticket will be turned away.

With all World Cup tickets for Cape Town games sold out, South African football supporters can still grab an early chance to see international football at the stadium, at an affordable price.

The challenge is an official World Cup event and hopes are high that it will boost the quality of youth football on the continent and abroad.

City management hopes that the challenge will grow into an annual event, leaving a world-class legacy for young footballers in developing nations. Football fans who attend the event will also be helping organisers to confirm that Cape Town is ready to welcome the world to the first-ever African World Cup.

“We need your help to test the city’s readiness to host the biggest event of all,” said Cape Town deputy mayor Ian Neilson. “It is important that this fourth event tests us to the limits.”

The city’s sports and recreation director Gert Bam said that those who attend are in for a treat.

Neilson added that city management was committed to developing young talent. “Some of the players in these teams will become household names in a few years and may even compete in the 2014 World Cup in Brazil.”

Some of South Africa’s brightest football stars have emerged from the under-20 ranks. Among them are striker Benni McCarthy, now with English Premier League team West Ham United; midfielder Elrio van Heerden, currently on loan to Turkish club Sivasspor from Blackburn Rovers; and winger Steven Pienaar, who plays for Premier League side Everton.

Another well-known former Amajita player is lanky defender Matthew Booth, who caused confusion among visitors to the 2009 Confederations Cup when crowds yelling his name, “Boooooth!”, were thought to be booing him.

The 1.9m-tall Booth currently plays for local team Mamelodi Sundowns as defender, after a stint with Russian club Krylia Sovetov Samara, where he was captain.