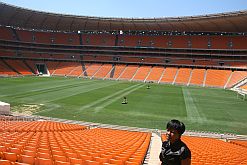 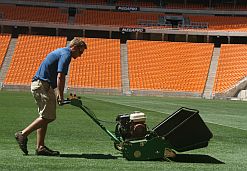 FNB’s grass being trimmed for a big game. 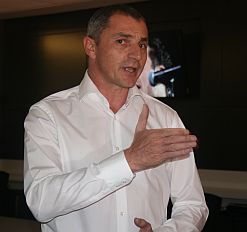 Jacques Grobbelaar is a director of FNB’s
management company.

The calabash-designed venue was a
hub of activity during the World Cup.
(Images: Bongani Nkosi)

The FNB Stadium in Johannesburg, a hub of activity during the 2010 Fifa World Cup, is the most profitable facility that was built or renovated in South African for tournament matches – and its success as a venue looks set to continue.

The stadium, also referred to as Soccer City, is now back to hosting big sport games like the Soweto Derby between Kaizer Chiefs and Orlando Pirates, other premier league football matches, as well as international football and rugby matches.

World-famous entertainers are also billed to perform at the 94 000-capacity venue in the coming months, said Jacques Grobbelaar, director of Stadium Management South Africa which manages the FNB facility, Soweto’s Orlando and Dobsonville stadiums and Rand Stadium in southern Johannesburg.

“Big stars are coming to the stadium,” said Grobbelaar at a media briefing at the stadium on 22 September.

It’s been confirmed that US pop sensation Neil Diamond will perform there later this year.

Although there are concerns that the 10 World Cup stadiums won’t be used to their full potential, this is not the case with the multi-purpose FNB facility, said the management group which has been given full responsibility to run the venue owned by the City of Johannesburg.

Tickets snapped up for FNB matches

The government renovated the FNB Stadium at a cost of R3.3-billion (US$460.6-million) ahead of the global football spectacle.

Since hosting the momentous World Cup matches, including the opening and final, FNB went on to stage four high-attendance football and rugby matches, two of which were sold-out events.

The sold-out Telkom Charity Cup, which provided all-day football activities in August, was held there, followed later in the month by a historic Tri-Nations match between South Africa’s national rugby side the Springboks and the All Blacks of New Zealand. Some 92 000 tickets were snapped up for this face-off.

Bafana Bafana beat Ghana at the stadium in a well-attended match on 10 August.

It was also a playground for the first round of the MTN Top 8 semifinal between Soweto giants Chiefs and Pirates, which attracted more than 50 000 spectators. The second round will also be at the stadium on 25 September.

Stadium Management South Africa has secured further agreements with Chiefs and Pirates, the biggest premier league clubs in Johannesburg, to use Rand Stadium and Orlando Stadium for their home matches.

It’s taken more than luck to strike these agreements with such big teams, Grobbelaar said. It took the company 14 months to get Chiefs to agree to play at Rand Stadium, and negotiations with Pirates dragged on for nine months.

It took 18 months to bring the Tri-Nations match to FNB, according to Grobbelaar. “We were quite chuffed with finalising those agreements,” he said.

“It’s not the fact that we’re lucky, all stadiums are competing [for these games].”

Negotiations are under way with the Golden Lions rugby team to be moved to FNB.

The stadium requires about R2.5-million ($35 000) for maintenance each month – but this is no problem for management because “we’ve put proper content by attracting Chiefs and Pirates”, said Grobbelaar.

Management is “doing well” in “meeting the financial demands”.

“We don’t have any concerns about sustainability. We know that the stadium will be utilised,” said Grobbelaar.

The FNB Stadium receives no funding from the City of Johannesburg for maintenance. “We accepted full financial responsibility of the stadium.”

Grobbelaar said 40% of the management group’s profit is ploughed into community development projects around Johannesburg.